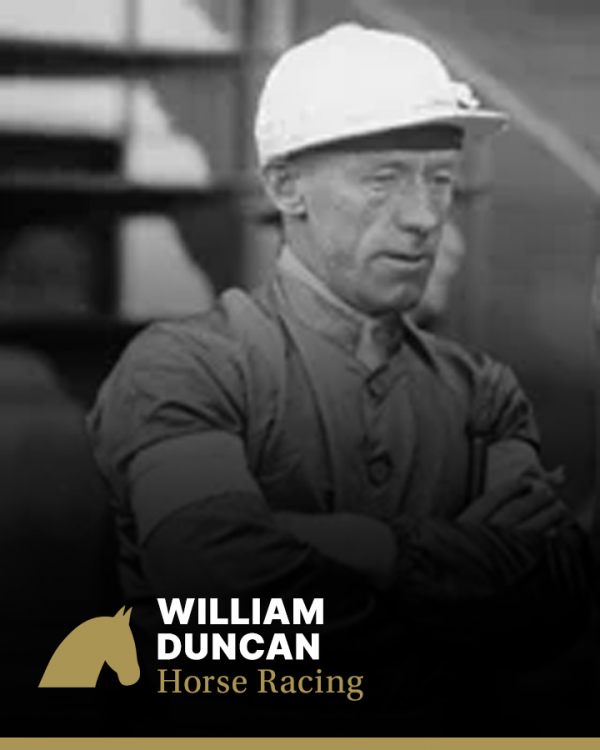 A natural lightweight, Bill Duncan was one of Australia’s most successful jockeys in the inter-war period. At just 152 cm tall, Duncan became one of a few jockeys who have won the Melbourne Cup at their first ride, when he rode ‘Night Watch’ to victory in 1918. He was given the ride because few riders were able to get down anywhere near the allocated weight of 41kg. Carrying only 42kg, ‘Night Watch’, taken to the front by Duncan six furlongs from home, outlasted a strong field to win by half a length in a race record time. Duncan won the Cup a second time on ‘Peter Pan’ in 1932.

As an apprentice, Duncan rode his first winner at Mentone in 1916, and was 18 when he won his first important race, the Coongy Handicap, in 1918. Less than a month later he won the Melbourne Cup.

In a career spanning from 1915 to 1933, he is possibly better remembered for his epic ride on ‘Manfred’ in the 1925 AJC Derby (New South Wales). ‘Manfred’ refused to leave the barrier, conceded the field 100m, but still won, urged on by an inspired Duncan.

His career was threatened in 1929 by a race fall in which his back was broken. Four years later another serious accident ended it, retiring to become a publican in Victoria. He also spent four years on the Fitzroy Football Club’s committee, from 1952 to 1956.