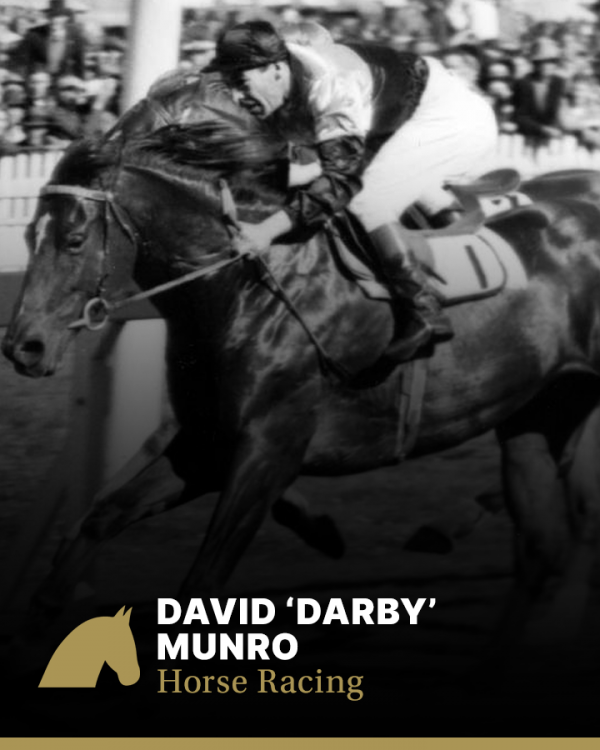 Born into a racing family in Melbourne, “Darby” Munro was destined to be a jockey and followed in the footsteps of older brother Jim who was an outstanding rider during the 1920s. Munro was an apprentice when Jim won the Melbourne Cup on Windbag in 1925. Two years later, Darby won his first race, defeating Jim Munro’s mount by a head.

A master tactician who was often the focus of controversy, Darby Munro was one of the legendary characters of the Australian turf. His strength and determination in tight finishes earned him the nickname among punters of ‘Demon Darb’. He had no peer in classics and weight-for-age races, where the manner in which a race was run often determined the result. He tended to dictate that pattern. He demonstrated this mastery with five wins in each of the WS Cox Plate, the Victorian Derby and the AJC Derby.

Among his illustrious victories, Darby was remembered by many punters for a race he failed to win. On the short-priced favorite ‘Shannon’ in the 1945 Epsom Handicap at Randwick, Munro found himself left 90 metres behind when the starter let the field go; in an inspired ride, Munro urged ‘Shannon’ after the field, only to be beaten by a half-head by ‘Blue Legend’. The furor which followed took years to subside, but the general verdict was that Munro was not at fault, and had in fact demonstrated yet again his unmatched horsemanship. He was once disqualified for not allowing Vagabond to do his best. He was refused a license to ride in England in 1953 and received a number of suspensions, for over-vigorous riding and interference. For all that, he was a hero figure to punters and his vigor was an inspiration to younger riders.

Apart from his wins at the WS Cox Plate, the Victorian Derby and the AJC Derby, Munro won the AJC Sires Produce Stakes four times, and Brisbane Cup, the VRC St. Leger three times, the QAJC Oaks twice, the AJC Sires Produce Stakes four times, the Epsom twice and the Doncaster twice. At the AJC autumn meeting at Randwick during Easter 1940, he rode nine winners.

Darby Munro became a trainer after ill health forced his retirement from active riding in 1955.

The Darby Munro Stakes is run annually by the Sydney Turf Club in his memory.