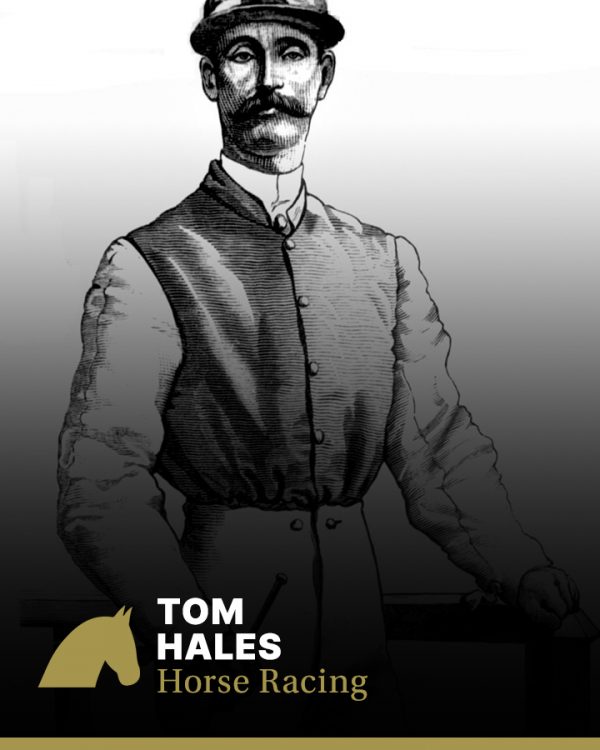 Tom Hales was born in Portland, Victoria, and was one of ten children. The family moved to Penola and then Robe, South Australia. Although forbidden by his father to become involved with racing, Tom at 12 found school drab, ran away from home and found refuge at Edward Stockdale’s station, Lake Hawden. There he first met Adam Lindsay Gordon whom he described as ‘the most competent horse-breaker I ever saw’.

At 13, Hales rode his first winner, Euclid, in a match race for £50 against another horse ridden by a well-known professional rider. However, the name of Hales had little significance in racing until 1872 when he went to Melbourne with the Adelaide trainer, H. Tothill, and was asked by the owner, T. J. Ryan, to ride The Ace in the Melbourne Cup. His mount ran second to The Quack but his handling of it was appreciated by knowledgeable observers.

At a time when the horse was every man’s mode of transport and the skill of a professional jockey had to be outstanding to set him apart, Hales was sought by the richest owners in Australia. For James Wilson, of the powerful St Alban’s (Geelong) stable and stud, Hales won the Victorian Derby and Oaks on the filly Briseis, and over a six week period for W. A. Long won the 1880 Australian Jockey Club Derby, the Victorian Derby and the Melbourne Cup on the unbeaten Grand Flaneur. Grand Fleneur is the only horse to win the Melbourne Cup and retire unbeaten (nine wins from nine starts). He also rode for Etteine De Mestre, but it was association with James White of Kirkham stud, New South Wales, that won him repute as ‘the (Fred) Archer of Australia’.

Although corruption was then rife in Australian racing he preferred to rely on his skill. Perhaps his best tribute came from the bookmaker, Joe Thompson: ‘I never saw Hales lose a race once he had it won, and that is more than I can say of any other jockey I have ever seen’.