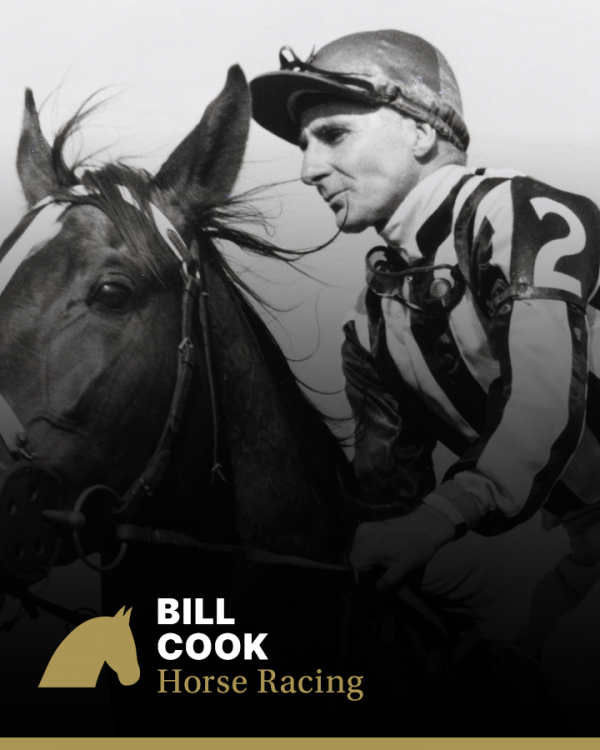 Billy Cook ranks high among Australia’s greatest jockeys, and oddly, can thank his father’s butcher shop business in the outer Sydney suburb of Hornsby for his start in racing. Cook was first legged onto a horse by his father, to deliver meat orders in the then sparsely populated area. This led him into an apprenticeship with J S Donohoe, elder brother of the former chief stipendiary steward of the Australian Jockey Club.

He rode his first winner at Canterbury and scored his first major success on ‘Crucis’ in the 1929 Sydney Cup, following that with a brilliant win on the mighty ‘Amounis’ in the 1930 Caulfield Cup. Cook accepted a contract to ride in India in 1932 (he later made two more trips) for the Maharaja of Kolhapur and on his second trip won the Bombay Jockey’s Premiership and the Aga Khan Gold Cup. Cook’s travels also took him to England and in 1950 he rode 42 winners and was placed second in the winning lists to the great Gordon Richards when the illness of his wife forced him back to Australia.

Among his many notable achievements Cook set a record by riding 126 winners, topping the Sydney Jockey’s Premiership, including three dead heats in the 1939/40 Sydney season. He was the premier jockey four other times in his career and runner up on ten occasions and rode for royalty in England. He also rode nine winners at the AJC Autumn meeting at Randwick in March, 1951. During his career he was widely acclaimed as “Last Race Cook” because of the frequency with which he won the last race of the day.