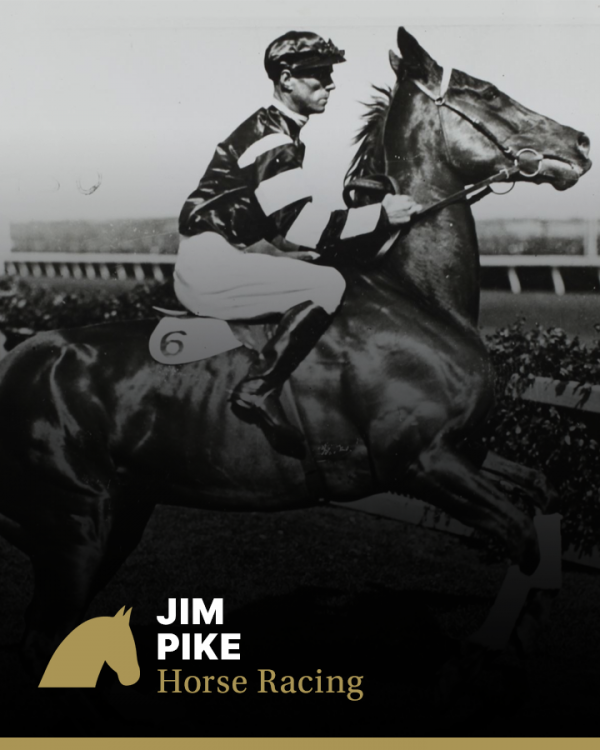 Claimed by many astute judges to have been Australia’s greatest horseman, Jimmy Pike left school at the age of 12 to apply for a job in a Newcastle biscuit factory. Turned down because he was too small (weighing just 21kg), Pike took the first work he could find, which happened to be as stable hand with Newcastle trainer Ernie Connors. Pike was riding winners in the Hunter Valley district before he was 13 but did not emerge until he was apprenticed to Sydney trainer Bill Kelso Senior.

It is a little known fact that Pike, aged only 14, was taken by Kelso to England in 1906. Pike was an instant sensation, winning many races before Kelso became homesick and returned to Australia with Pike.

In a fantastic riding career which stretched from 1907 to 1936, Pike rode all the great champions of the time including the immortal Phar Lap, won virtually every major race on the calendar, made and gambled away two fortunes, failed as a trainer because of ill health, and was finally rescued from the tiny flat in a huge apartment block he once owned at Bondi by Sydney trainer, the late Jack Green, who gave him a job and restored his self respect.

Pike won his first Melbourne Cup at his 14th attempt on the great Phar Lap in 1930. In 1926 he had come close on the favourite Pantheon, finishing third, a half a length and a neck behind Spearfelt and Naos. Pike rode Phar Lap again in the 1931 Cup, but the great champion, weighed down with 68kg could manage only 8th. In 1934 Pike would surely have won a second Cup but was suspended and had to forgo the ride on the ultimate winner, Peter Pan.

The association which formed between Pike and Phar lap was, and still is, more of a cult than a simple jockey-horse association. When aboard the champion, Pike seldom had to do any more than flick his whip in Phar Lap’s general direction. Pike rode Phar Lap in 30 races and won 27 of them but was not on Phar Lap when the champion won the Agua Caliente Handicap on his trip to America in 1932.

Pike was very popular with punters for his riding skills and personality, even though his own biographer described him as ‘about as talkative as the wrong side of a tombstone’. Physically he was tall for a jockey, and the continual wasting he endured to make the weights made his face gaunt.