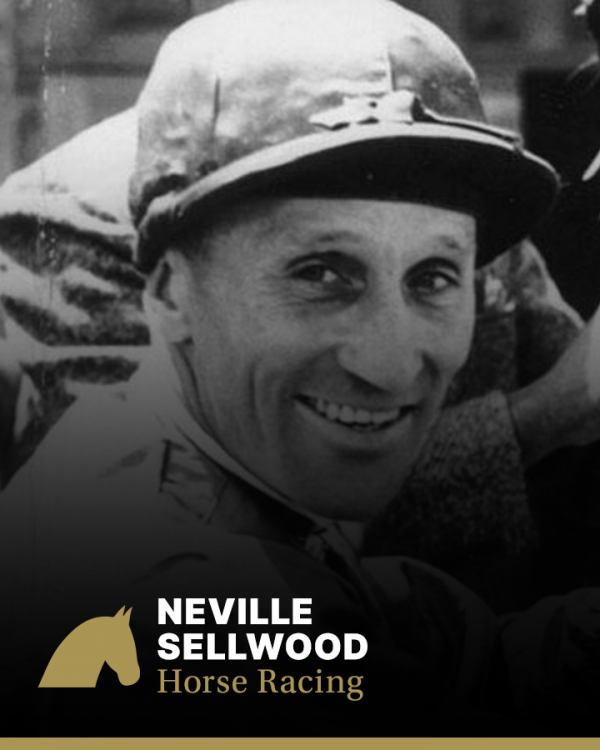 Neville ‘Nifty’ Sellwood was one of the big three Sydney-based jockeys who had a huge influence on Australian racing throughout the 1950s, along with his contemporaries George Moore and Athol Mulley.

The son of a former leading Queensland jockey, he was apprenticed to Brisbane trainer Jim Shean in 1938 and was an immediate success, riding 20 winners in his first three months in the saddle.

Although still a novice, he was considered good enough to be given the ride on ‘David Spear’ in the 1939 Caulfield-Melbourne Cup double, and did well to finish fourth in the Caulfield Cup.

After winning the Townsville jockeys premiership for three years while serving in the army, Sellwood was offered the chance by Sydney trainer Maurice McCarten to head south after the war. He linked with McCarten for the 1946/47 season, and won the Sydney jockeys premiership in 1949 with 65 winners. He went on to win that premiership another five times.

Sellwood, a fairly unobtrusive character, became the epitome of culture under McCarten for whose stable he was number one jockey from 1946/47. He became known for his correctness of dress and speech – Sellwood was very seldom in the stewards room.

His first major win was on ‘Delta’ for McCarten in the Victoria Derby – an association with this horse could be said to have launched his career, for on Delta he also won the Cox Plate, Metropolitan, Melbourne Cup, St Leger and 18 other high class races.

Sellwood won the 1950 Caulfield Cup on ‘Grey Boots’ and the following year on ‘Basha Felika’ – he made it three in a row in 1957 with a record time on champion ‘Tulloch’.

‘Nifty’ had a great affinity with ‘Tulloch’, riding him 14 times for 12 wins, and combined equally well with the other champion of those years ‘Todman’ on which he won ten races, including the first Golden Slipper, Champagne Futurity and Guineas.

Sellwood was again in the spotlight when he rode ‘Toparoa’ to win a second Melbourne Cup in 1955 thwarting the champion ‘Rising Fast’s’ bid for the ‘Double Double.’

Sellwood made the first of many overseas trips in 1950 and had wins in the United States and England. In a tragedy of gigantic proportions, Sellwood was killed in a fall while riding ‘Lucky Seven’ at the outer Paris track Maisons-Lafitte in 1962. At the age of just 39 and at the height of his powers, he was first jockey to the stable of the Aga Khan in France and was leading the French Jockeys Premiership.

Sellwood was prone to whip use and often had a ‘loose rein’ but was equally at home in sprints or distance races, and was a world class rider. He could use the whip in both hands and was comfortably efficient on right or left-handed tracks.

He won 1860 races. One of his major triumphs overseas was in the English Derby in 1962, the year of his death.