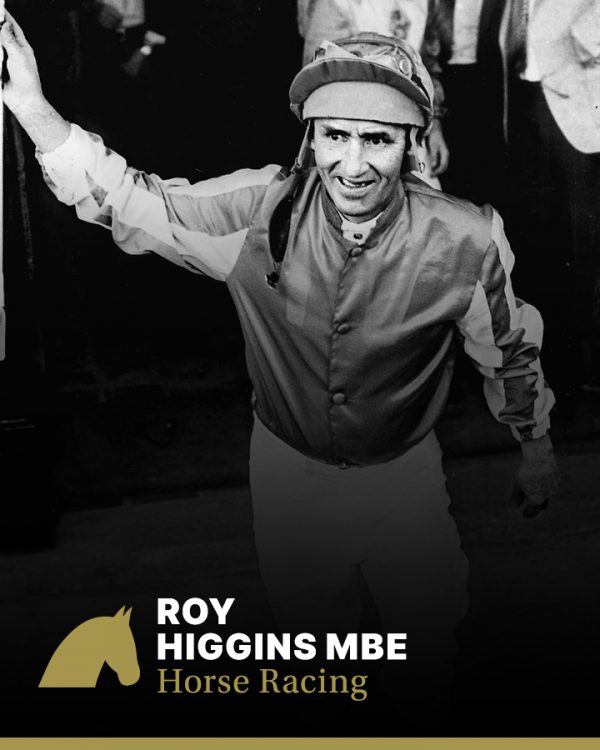 Roy Higgins, or ‘The Professor’ as the racing world has always known him, won major races in every Australian state. It was a rare achievement in a career that extended from 1953 as an apprentice in Deniliquin (New South Wales), until 1984. After establishing himself in regional racing circles, he made his way to Melbourne, where he was to become one of Victoria’s greatest ever jockeys.

Higgins was an exponent of perfect balance and consummate judgment, coupled with admirable finesse in planning race tactics that so often were deciding factors in his most memorable wins. He was the jockey for all courses, with an incomparable record in Australia’s biggest races that stamped him as a worthy champion in any era.

At the VRC’s Autumn Carnival at Flemington in March 1972, Higgins rode a record 12 winners over three days, including five in one day. In 1973, he rode a record eight consecutive metropolitan winners. On four occasions he rode four winners -at Moonee Valley in 1965 and 1972, Caulfield in 1968, and Flemington in 1977.

Higgins was awarded the Medal of the Order of the British Empire (MBE) in 1974 for his services to racing. Higgins retired from the riding in 1983 declaring his ambition as “to be a little fat man”. His last ride in a race was at Flemington in October 1983, after which he went on to take his place in media ranks. He was inducted into the Australian Racing Hall of Fame in 2001.