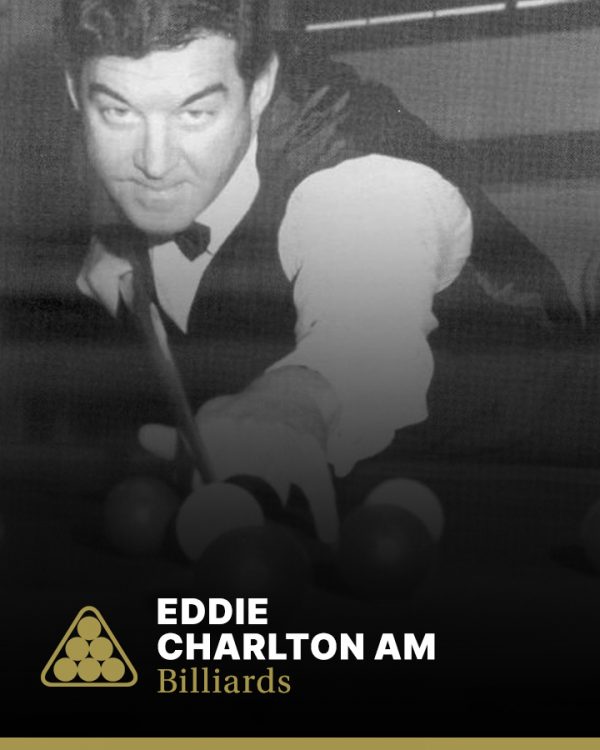 Eddie Charlton was born in Merewether, New South Wales, and came from a sporting family. His brother Jim was also a professional snooker player but never joined the world ranks. Eddie himself was a senior grade footballer, a champion surfer, a good cricketer and boxer.

Having been a coal miner, he became a professional snooker player in 1963 at the age of 34 and the following season he won the Australian Professional Championship, a title which he went on to win, with one exception, every year for the next 20. Charlton was the most successful snooker player ever to come out of Australia. He was ranked number three in the world for five consecutive seasons from 1976/77, the first year of the rankings, though surprisingly he never won a ranking tournament (in those first few seasons only the World Championship counted). He set a world snooker record in 1967 by making consecutive breaks of 135 and 137 – a world record break. The popular Australian reached the world final in 1968, 1973 and 1975, losing agonisingly 31-30 to Ray Reardon on the latter occasion.

In 1972, 1973, and 1980, he was victorious in the BBC’s ‘Pot Black’ competition, giving him a high profile with television viewers. He also recorded the first century break (110) in that tournament, quite an achievement in a one-frame per match format. Also highly proficient at billiards, he twice, unsuccessfully, challenged Rex Williams for the world title in 1974 and 1976, and reached a third final only to lose by a handful of points to Mark Wildman in 1984. Four years later he made the final again but found Norman Dagley too strong.

Charlton was well known for playing with a very straight cue action and rarely hit the cue-ball with side. Yet his contribution to cue sports was immense and he is the only player to have been world championship runner-up in both snooker and billiards without winning either title.

Charlton created another record in 1995 by winning both the Australian 9-ball and 8-ball Championships in the one week. At the Age of 70, in 1999 he won the NSW Open 9-ball Championship and travelled to Spain to compete in the World Championship.

Always active in the organisation and promotion of the game, Charlton became a Member of the Order of Australia in 1980. He formed the Australian Professional Players Association and was responsible for bringing many of the top players to play in Australia.