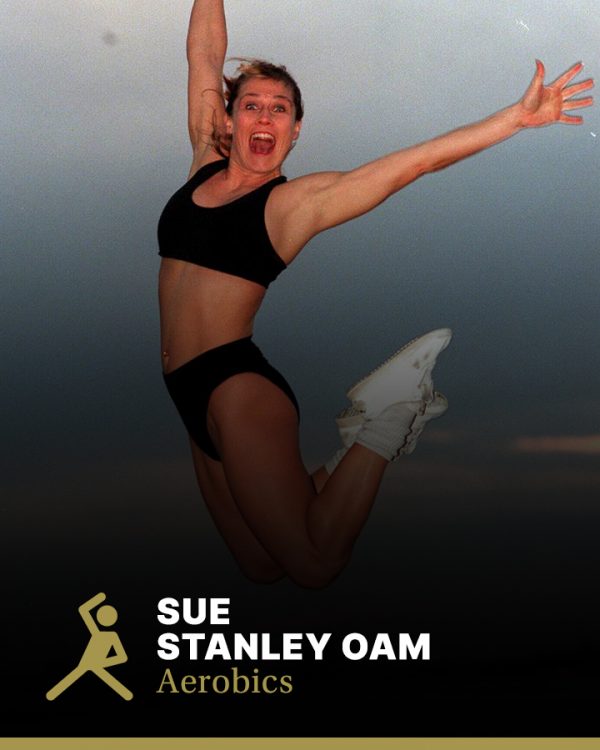 Sue Stanley OAM was inducted in the Sport Australia Hall of Fame in 1998 as an Athlete Member for her contribution to the sport of Aerobics.

Sue Stanley reached the highest level of performance in four different disciplines throughout her illustrious career, beginning in the Australian Institute of Sport’s gymnastics team where she attained an International Level 10 status. She was later welcomed to the global sporting stage as a member of the Australia 1988 Seoul Olympics Team in what was then a demonstration sport of water skiing.

However, Sue’s true passion was found in Aerobics where she was renowned worldwide for her exceptional strength, flexibility, and physical prowess. Sue’s professional Aerobics career spanned just three years (1991 – 1994), in which she achieved numerous gold medals and an astonishing combined 16 state, national and international championships. She would later stage a remarkable and successful comeback in yet another professional sport, this time achieving the title of Ms Fitness World Champion in 2000 which she described as a cross between aerobics and a beauty pageant.

Having started ballet at her local church at the age of four, Sue transferred to gymnastics as a 10 year old where before long she began to pursue aerobics competitively. In 1991 she achieved her inaugural National Aerobic Championship Title which seemingly paved the way for her magnificent career where she was undefeated in four years at the international level, compiled an unprecedented 35 consecutive victories, three World Championship Titles and countless accolades.

Undoubtedly regarded as the queen of Sport Aerobics, Sue’s achievements in her field are unparalleled. She was the only women of her time to win and defend a IAF World Cup Aerobic Champion Title (1993 & 1994) and was also crowned the WAC World Aerobic Champion in 1994, making her the only female in history to win three World championships.

In adding to her phenomenal professional success, Sue was instrumental in the identity shift of Sporting Aerobics from the confines of the Fitness industry toward the public eye, creating a new dimension for young females and males to actively pursue. She received the Advance Australia Award in 1995 for her significant contribution to sport and was invited to be an Australia Day ambassador 2001.

Post official retirement from professional sport, Sue continued to be an advocate for the Sport and Recreation Industry through publishing books, creating health and fitness centres, building a personal training regimes and websites for the public. Sue is not only an exemplary athlete but also an astute business women posing as a role model for healthier living to people of all ages. In 2020 Sue was awarded the Medal of the Order of Australia for service to sport, and to the community.