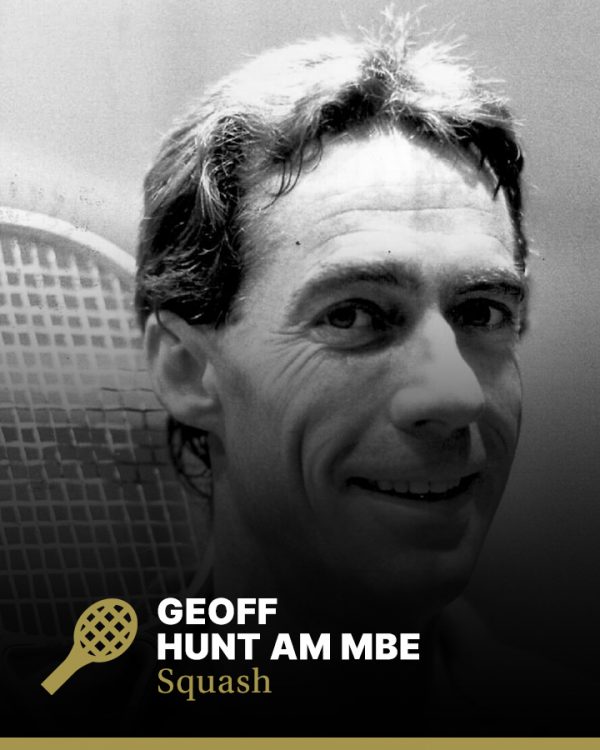 Geoff Hunt AM MBE was inducted into the Sport Australia Hall of Fame in 1985 as an Athlete Member for his contribution to the sport of squash.

Hunt first played squash at age 12 and at 15, he won his first state championship when he took out the Victorian junior title in 1962. The following year he won the Australian Junior Championship and his first open event, the Victorian State Championship. Then at the age of 18 in 1965, he went on to win the Australian national title – the first of seven times he would triumph at that level, making him the youngest player in history to do so.

It was therefore no surprise that the official magazine of the Squash Racquets Association of Britain rated Hunt in 1980 as ‘the world’s greatest ever squash player’. Two years later, aged 35, Hunt retired from competition squash as the most celebrated player of the sport in Australia’s history, announcing his retirement due to ongoing injury battles.

In all, Hunt played 215 tournaments in Australia and overseas and won 178 of them, representing more than 80 per cent of those he contested. In 1969, he became the first player to win the World Amateur and British Open Championships in the one year. He was ranked either number one or two in the world every year from 1967 to 1981.

Hunt also ventured into other sports, playing in five major American Handball events. He won three, and was runner up twice. He was also runner up in the Australian Superstar event, which incorporated ten varieties of sport, in 1977.

Hunt maintains a connection with the squash community to this day. He was appointed head coach of the Australian Institute of Sport squash unit when it opened in 1985 until 2003 where he helped develop a new generation of Australian squash stars, and is Squash Australia’s high performance manager.