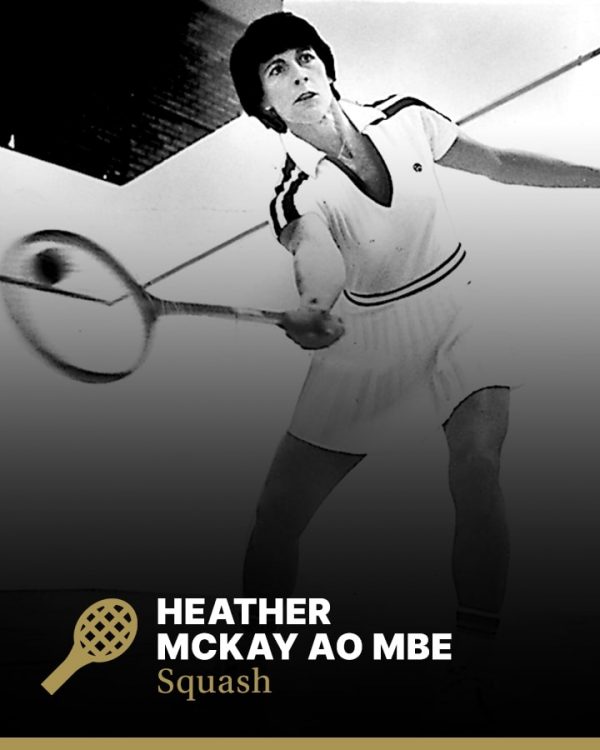 Heather McKay was inducted into the Sport Australia Hall of Fame in 1985 as an Athlete Member for her contribution to the sport of squash. She was elevated as a Legend of Australian Sport in 2000.

McKay ranks among the greatest players in the history of squash. She dominated the women’s game in the 1960s and 1970s, winning 16 consecutive British Open titles between 1962 and 1977.

The eighth of eleven children, McKay played tennis in summer and hockey in winter. In 1959 with the idea of improving her fitness for hockey, she played her first game of squash. A year later she entered the national championships and won the Australian amateur title, and then won it every year for the next 14 years. In 1962 she won the first of 16 consecutive British Opens – a title she held until 1977. McKay also held the New South Wales and Victorian titles from 1961 to 1973.

In 1985 the McKay’s returned to Australia and until 1993 worked as a squash coach at the Australian Institute of Sport.

In over 20 years of competition, McKay lost just two matches, once in 1960 to Yvonne West and in 1962 to Fran Marshall, a record that is unlikely to ever be broken.

McKay also proved to be a talent in other sports, including hockey, representing Australia in 1967 and 1971. More recently, she has taken up tennis, winning the world veteran’s tennis championships and was also part of the winning combination in the world teams event, the Alice Marble Cup.

Inspiration: “Play hard but fair. Be the best you can be”