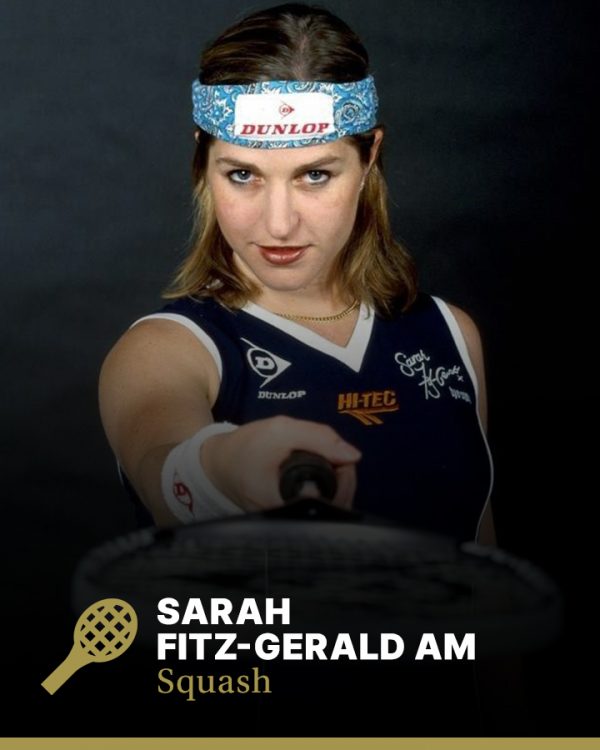 Sarah Fitz-Gerald AM was inducted into the Sport Australia Hall of Fame in 2010 for her contribution to the sport of squash.

Fitz-Gerald stands tall, even in a sport where Australia has had more than its share of champions. She was World Open Squash Champion five times between 1996 and 2002 and held the World No 1 ranking through 1996-7-8. After knee surgery in late 1998 and in 1999 she came back to reclaim the top ranking in 2001 and held that honour until she retired from the World Tour in 2003.

She represented Australia 75 times, including a gold medal winning performance in the 2002 Commonwealth Games. She has been a tireless worker for the game and a long serving executive of the Women’s International Squash Players Association.

Sarah Fitz-Gerald stamped herself early as an outstanding player with succession of State and national under-age titles, and earned international recognition in 1987 when she won the world junior title. Success followed when she graduated to senior ranks but it was not until her victory in the World Open championships in Malaysia in1996 that she achieved ‘superstar’ status. She stormed through that tournament without dropping a single game (she lost a total of just 29 points) and took the final easily from England’s Cassie Jackman.

She confirmed that form the following year, winning seven titles and capturing her second World Open title in Sydney and winning her first Australian Open before a home town crowd in Melbourne. Despite uneven form in 1998 she produced her best again in the World Open, beating compatriot Michelle Martin in a gripping final to take her third consecutive World title. After helping Australia win the World Team event later that year she was forced to withdraw from squash for surgery on her left knee.

A further knee operation saw her out of action for much of 1999 but she came back in devastating form in 2000, winning five successive tournaments before being sidelined again with injury, but returning in 2001 to claim her fourth World Title.

She won the title again in 2002 and retired in February 2003 as one of the game’s all time greats.