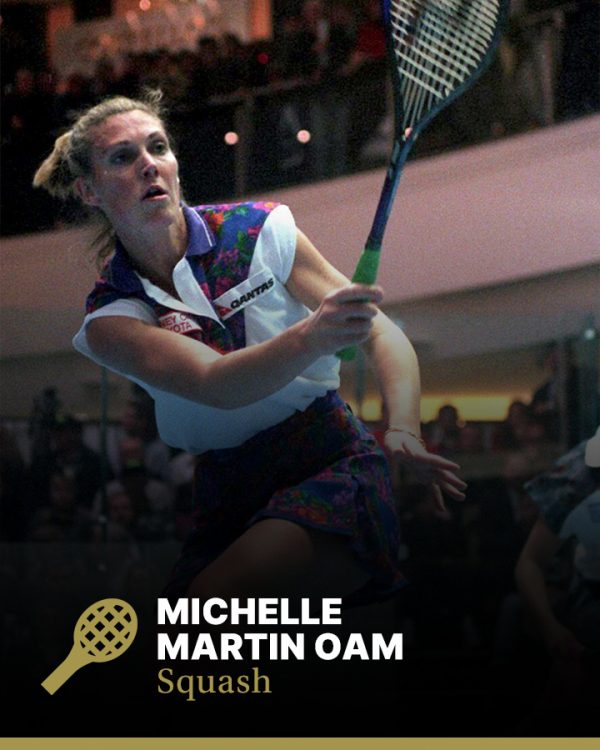 Michelle Martin OAM was inducted into the Sport Australia Hall of Fame in 2001 as an Athlete Member for her contribution to the sport of squash.

Martin has been one of Australia’s most prolific athletes on the international squash scene. With six years at the Australian Institute of Sport in the 80s, she benefited from the coaching of two of the best ever squash players, Geoff Hunt and Heather McKay.

Martin comes from a famous family of squash players. Her older brothers Brett and Rodney were both top-class players, Rodney winning the men’s World Open in 1991, and Brett achieved a career-high ranking of world number two on the men’s circuit.

Martin won her first competitive tournament in 1990, and quickly rose up the rankings until she faced world number one, legendary New Zealander Susan Devoy, in the 1992 world title final, which she lost 9-4 9-6 9-4.

This domination overflowed into her Australian representational duties, competing at six World Women’s Team’s Championships in 1987, 1990, 1992, 1994, 1996 and 1998. Martin also competed for Australia at the 1998 Kuala Lumpur Commonwealth Games winning two gold medals in the women’s singles and the mixed doubles. She also represented Australia in the 1996 and 1999 World Cups. In addition to her outstanding international prowess she won seven Australian Open Championships – in 1991, 1993, 1994, 1995, 1996, 1998 and 1999. She announced her immediate retirement at the end of 1999, having achieved everything she wanted.

Martin has continued her commitment to Australian squash in the coaching field, and was manager/coach of the victorious Australian team at the 2004 World Women’s Teams Championship in Amsterdam.