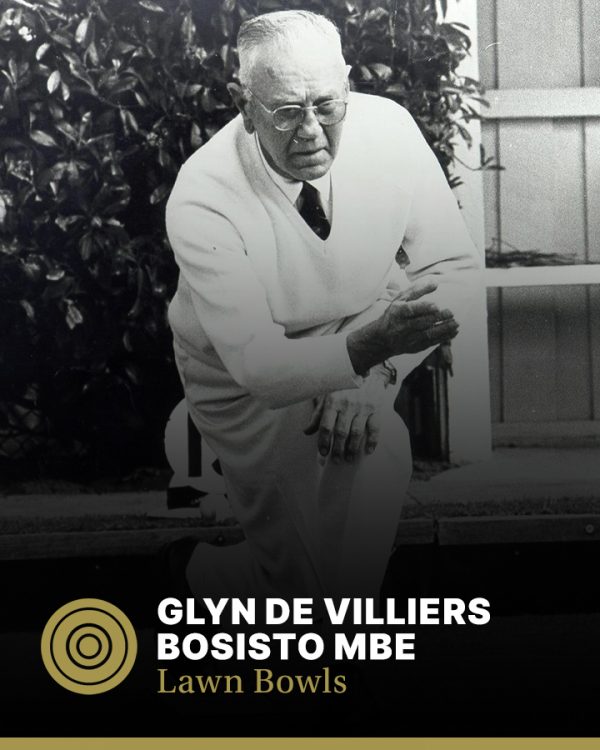 Glyn de Villiers Bosisto was one of the most successful and colourful performers in Australia’s lawn bowls history. In his prime, press writers described him as the ‘Bradman of Bowls’. He is the only man to win four successive Australian titles – 1949, 1951, 1952, and 1953 (no national title was held in 1950).

He represented Victoria in his first year of competitive bowls and in his third year in 1935 he was chosen as skipper of New South Wales. He retained his position as interstate skipper for 35 years. In all, he played for Australia, Victoria, and NSW on 256 occasions. This total could have been doubled if he were able to obtain more leave from his employer to compete interstate.

Bosisto was chosen to represent Australia as singles player in three British Empire and Commonwealth Games, Auckland 1950 (he withdrew due to business commitments), Vancouver 1954, and Cardiff 1958.

When aged 67, Bosisto was considered too old to represent Australia at the World Series at Sydney in 1966. However, he twice defeated World Series winner David Bryant (then aged 35) in exhibition games in Melbourne. However the English team came to Melbourne to play exhibition games against Victorian fours, pairs and singles players. Bosisto was chosen to play David Bryant, England’s singles player and winner of the current World Singles Series. Bosisto won the game 21-17 and after a further game of 14 ends was arranged, Bosisto won this 9-6.

No bowler in the history of the game in Australia can match his record of major singles championships. These include one round robin singles for the right to represent Australia at the Cardiff Games, seven Victorian champion of champions, one Metropolitan and five Victorian championships (1951, 1952, 1954, 1957, 1963), four Masters singles, two Mildura Carnival singles, one Moomba Anniversary singles, one Victorian Veteran singles, 29 club singles (55 in total). At one stage of his career he won 68 consecutive singles matches in championship competition.

He was made a Member of the Order of the British Empire (MBE) in 1976 for his service to sport and the community.