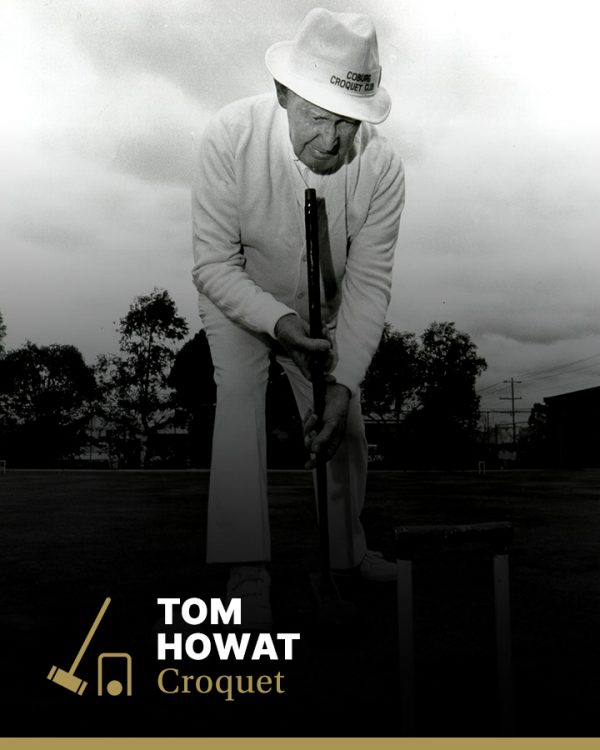 In 1953, 41 year old Tom Howat burse into croquet with spectacular results in his first games at the Brunswick Croquet Club in Melbourne. Two years later he had won the first of nine Australian open singles championships (1959, 1961, 1963-1968).

Howat turned to croquet after a varied sporting career that included middle distance running for Victoria, competitive billiards and tennis, golf, chess, and bowls. At first, bowls maintained his greatest interest as he was a leading A grade metropolitan pennant captain in one season, finishing undefeated. He also appeared in two semi-finals in the state Champion of Champions and a quarter-final in the state singles.

However, croquet soon took over and a keen Howat, a plumber by trade, would sometimes start work at 5am so he could play pennant or a tournament later that day.

Howat was a Member of the MacRobertson Test Team that played against the United Kingdom and New Zealand in 1969. (This is a competition where the main croquet playing nations play a team championship every three or four years.)

This remarkable left hander with an Irish grip and a right foot forward, left foot back stance was a perfectionist who based his game on a complete range of strokes executed with absolute precision. His enthusiasm and dedication to the game was complete. When not playing, he was always watching others play, and in his early years learnt much by watching the technique and tactics of leading players.

In the 60s, Howat visited Queensland, New South Wales, Tasmania, and South Australia giving demonstrations and coaching sessions, which contributed much to the development of the sport. His many visits throughout Victoria led to him being an automatic choice as Victoria’s first director of coaching.