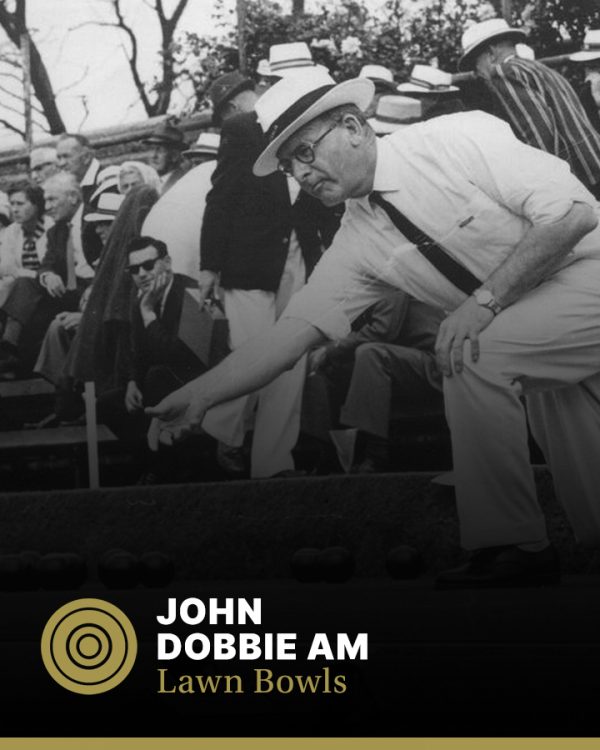 One of Australia’s most successful exponents of lawn bowls, John Dobbie represented Australia at two British Commonwealth Games and at the first and second World Bowls championships. Dobbie represented Victoria 227 times and played in over 200 representative matches interstate.

Dobbie was initially involved in lacrosse, founding the Camberwell (Melbourne) Lacrosse Club in 1929, and in 1933, founded the Old Trinity Grammarians Lacrosse Club. He represented Victoria in lacrosse at the Australian Carnival in Perth in 1947 and was manager of the Victorian team.

Dobbie first played bowls in 1924 and joined the Auburn Club in 1934, quickly winning the President’s Trophy. He transferred his membership to Glenferrie Hill Recreation Club (now the MCC Bowls Section) in 1937 and remained there as a member until his death in 2005.

Returning from the war, where he served in the Artillery Survey Unit, he resumed his bowls, and in 1947 won the Glenferrie Hill club championship, defeating his father Francis 25-21 in the final. Dobbie went on to win that championship 16 more times.

Dobbie’s international career began in 1964, where he competed in South Africa in three Test matches. In 1966 he competed at the first World Bowls championships in Sydney, where he won gold in the triples and silver in the fours. He also competed at the second World Bowls championships in Worthing, England, in 1972. He represented Australia at two British Empire Games, the 1970 Edinburgh Games in the men’s fours, and the 1974 Christchurch Games in the pairs.

Dobbie was also involved in the administration of lawn bowls and the media. He was the original presenter of the bowls report on Channel 7’s World of Sport from 1959 to 1987. From 1959 to 1980 he was secretary of the Royal Victorian Bowls Association and from 1975 to 1985 he was the honorary secretary of the Australian Bowls Council. In 1978 he appointed as the Executive Director of World Bowls. In 1980 as Executive Director, he managed the successful staging of the World Bowls tournament, held in Frankston (Melbourne). He is a life member of the RVBA, the International Bowling Board, and the Australian Bowls Council and was an inaugural member of the RVBA Hall of Fame in 1998. In 1977 he was made a Member of the Order of Australia (AM) for his services to lawn bowls.