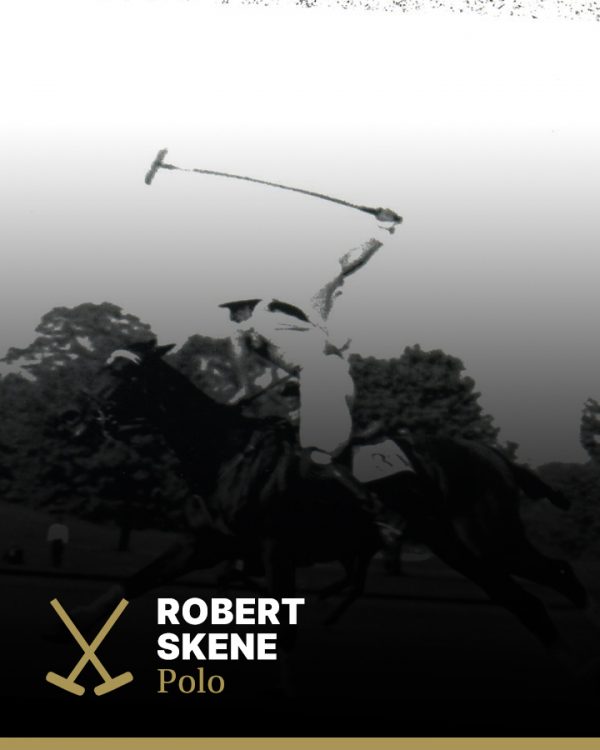 During his long and illustrious years in polo, Charles Robertson Skene played almost everywhere around the world and competed in a great number of national and international tournaments and special events. He was the first Australian to be classed as a ‘ten goal’ polo player, the highest rating that can be attained in the sport.

Skene was born in the tea plantations of Assam, India, his Australian father was a tea planter and distinguished polo player, rising to a rating of ‘eight goals’ on a trip to the United States in 1929. He was sent to school in England only to rejoin his parents at their new home in Australia.

Fearful of horses as a child, Skene began his illustrious polo career playing country club polo with his father and friends in Australia, commencing his playing career in 1931 when the Australian Polo Club was formed at Cobbity, New South Wales. In 1932 at age 18, his handicap was established as ‘two goals’, advancing to ‘seven goals’ in 1937. His first great opportunity came in 1937 when he accompanied the Ashton brothers with their Australian Goulburn (NSW) team when they went to play in London’s polo season, winning the English Champions Cup at Hurlingham. He performed so well that he was invited to try out for the English team, which was to challenge for the Westchester Cup at Long Island, New York in 1939. He is the only Australian to play for England against the United States in the coveted event.

1939 was a banner year in Skene’s polo career. After the British team’s trial matches in California, he was chosen to play the ‘number one position’ and put on an outstanding performance in these matches at the Meadow Brook Club, as well as in the special exhibition match against the American ‘40 goal’ team. He later won the National 20 Goal Tournament with the ‘League of Nations’ team at Bostwick Field and that Autumn played on the ‘Greentree’ team that were finalists in the National Open Championships and won the Monty Waterbury Cup. His fine play earned him a ‘nine goal’ rating and he was identified by the American press for his rapid and accurate style of play, earning the nickname ‘Hurricane Bob’.

Skene was still in the United States after the Westchester Cup when the Second World War began. He started to assist the war effort in Europe by raising funds in the United States through the ‘Bundles for Britain’ campaign. Soon, however, he found this was not enough and he joined the Indian Army and went into Officer’s training school near Bombay, India. When asked to join the fearless Gurkhas as an officer, Skene jumped at the chance as they were the only polo playing regiment in the Indian Army.

In February 1942, Skene was posted to the Allied War campaign in Malaya and was taken prisoner of war by the Japanese at the fall of Singapore. For three and a half years he was incarcerated in Singapore’s Changi Prison.

Returning to India with his troops, at the end of 1946 Skene was discharged from the Gurkhas and took up a position as a steward with the Straits Racing Association in Kuala Lumpur, Malaya. It was from here that, without the aid of ‘photo finish’ electronics, Skene called and judged the races in Ipoh, Kuala Lumpur, Singapore, and Penang.

Polo recovered slowly after the War, and it was not until 1949 that Skene was invited by Lord Chowdray to play for England against Argentina and Chile. He was given a ‘six goal’ rating, but within 30 days was put back to ‘nine goals’. Due to the War, for 10 years from age 25 to 35, Skene played no polo. However, those that had seem him play before and after Changi said that his game had hardly suffered.

In 1950, Skene went to live in the United States. He settled first in Los Angeles where he played and managed the Beverly Hill Polo Club. At the end of the 1950 polo season in New York, he was raised to ten goals.

Though he had been raised to ‘ten’ in New York in 1950, he knew he could never accept that he was worth ten until he proved it in the ‘mecca’ of polo, Argentina. In 1954, he became the first foreigner to be invited to play as a member of an Argentine team, “El Trebol” in the Argentine Open championship, an honour he always considered one of his greatest achievements. Twice, in 1954 and 1956, he was invited to play, twice he was on the winning team. He played in eight United States Open championships and was on the winning side in 1952, 1958, and 1962. Some of his other memorable victories include the Pacific Coast Open at least four times in the 1950s and 1960s, and the Monty Waterbury Cup again in 1950.

In 1960, he and his family moved to Santa Barbara where he took up managing the Santa Barbara Polo Club. He maintained the highest rating possible of ‘ten goals’ for 17 years until the age of 53, in 1967.

He proved himself to be a tremendous asset and role model to the game of polo as a player, teacher, and coach. He was always known as a superb horseman, for great anticipation and ball control. After retiring from the international field, Skene dedicated himself to the promotion of polo throughout the United States, teaching at schools and clubs throughout the country. As a living tribute to Skene, the United States Polo Association sanctioned the ‘Robert Skene Trophy’ in 1994, to be played during the ‘high goal’ season at the Santa Barbara Polo Club.

In 1990 he was one of the inaugural inductees into the United States Polo Hall of Fame.