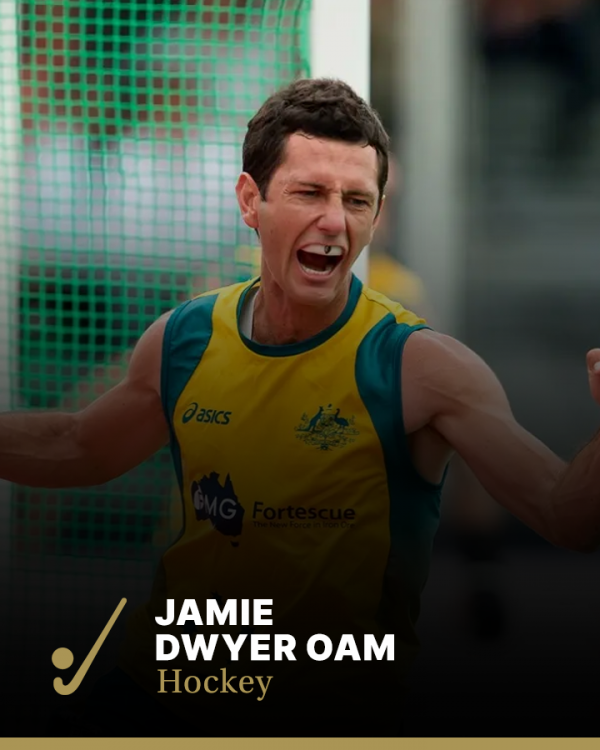 Jamie Dwyer OAM was inducted into the Sport Australia Hall of Fame in 2021 as an Athlete Member for his contribution to the sport of hockey.

Jamie Dwyer is widely regarded as one of Australia’s greatest ever male hockey players to have played the game. Competing at four Olympic Games, Jamie was a member of the Athens 2004 Olympic Games squad which broke the drought to win gold for the first time after a run of bronzes, and he scored the winning goal in the final of the historic match.

Dwyer dominated on the world stage with the Australian team over a 16-year career, winning gold in two world cups, three Commonwealth Games and six Champions Trophies.
His impact on the field was evidenced by a phenomenal scoring rate of 66 percent from his 365 international matches. This record saw him being named the International Hockey Federation (FIH) World Player of the Year five times between 2004 to 2011.

Dwyer made his international debut in 2001 after working his way through the national junior squads. He played his first match for the national team in the 2001 Oceania Cup before being selected for the Champions Trophy that same year in the Netherlands, where Australia finished runners-up. After finishing in second place in the 2002 World Cup, Dwyer’s first trophy success for the Kookaburras came when Australia won gold at the 2002 Manchester Commonwealth Games. By now he had already proven himself a dangerous scoring prospect for the Kookaburras, scoring 20 goals from 10 tournaments. In Manchester, he scored in three of the five games in which Australia played, including two hat-tricks, one of which was in the gold medal match against New Zealand.

Dwyer continued his form leading into the 2004 Athens Olympic Games, adding 33 more goals to his tally from across 14 different tournaments. It was in Athens that his most memorable moment occurred. In the first match at the Games, Dwyer scored a hat-trick against Australia’s trans-Tasman rivals. Dwyer etched his name in history during the gold medal match where Australia sought to finally fulfill the promise it had shown in many other past Olympics. In the match against the Netherlands, Australia found itself on the back foot being a goal down after the first half. However, early in the second half, an equalizer was enough to push the tight contest into extra time. That set the scene for Dwyer to score the winning goal from a penalty corner, securing Australia its first men’s Hockey gold medal after 48 years of participation. This performance secured him the FIH Player of the Year award, his first of five.

Dwyer won the first of his six Champion Trophies in 2005. He only scored three goals during the entire tournament from his six appearances. At the Melbourne 2006 Commonwealth Games, Dwyer was a part of Australia’s Gold medal team. It was his second Commonwealth gold medal and the team’s third in a row. Australia saw the year out with a fourth-place finish in the 2006 Champions Trophy and runner-up at the World Cup in Germany where he was named the Player of the Tournament. Dwyer scored his most goals in a game during the 2007 Oceania Cup, where he scored eight goals ahead of Australia finishing runners-up in the Champions Trophy that year.

After missing the first tournament of 2008, Dwyer played every event for the year, including his second Champions Trophy victory, defeating Spain in the final. He was also named Best Player of the Tournament. The year was rounded out with the 2008 Beijing Olympic Games, in which Jamie scored four goals across the tournament. Australia walked away with bronze, with Spain extracting some revenge for their Champions Trophy loss, relegating Australia to the play-off against the Netherlands.

Dwyer was selected as captain for the 2009 Champions Trophy, a position he had been sharing with other leadership players for the past year. This tournament saw the Kookaburras win their third trophy in front of a home crowd in Melbourne. Later that year he took out his third FIH Player of the Year title.

Dwyer helped lead the way in the Kookaburras’ campaign at the 2010 World Cup. Australia took out only their second ever World Cup title before Dwyer took the next tournament off to recover from injury. He was back in time to lead the team at the 2010 Champions Trophy, where Australia won its fourth gold medal with Dwyer named the Best Player of the tournament and equal leading goal scorer. His leadership of the Kookaburras continued at the 2010 Delhi Commonwealth Games, where the team continued its unbeaten record of Commonwealth gold medals, defeating the host nation in the final.

Dwyer missed the start of 2011, due to injury, but was back in time for the Oceania Cup, which Australia won for the seventh time. The Kookaburras continued their winning streak at the Champions Trophy, for a fourth consecutive time, with Jamie’s seven goals crowning him as the leading goal scorer of the tournament. He was then named FIH Player of the year for the third time in a row, and his fifth time overall. He was the first male player to win the award on this many occasions.

Dwyer started 2012 with a bronze medal at the London Olympic Games, scoring six goals in the process before playing in his last Champions Trophy, winning a gold medal against the Netherlands. He helped the Kookaburras to the final tournament of the FIH World League during the 2013/14 edition, where Australia won for the first time. Dwyer missed the finals competition but was back in time to defend Australia’s World Cup title against host nation, the Netherlands, in the 2014 edition.

In Dwyer’s last years of hockey, he played a key part in Australia defending its World League title and securing qualification for the 2016 Rio Olympic Games. Following these Games, Dwyer announced his retirement, bowing out as the most decorated Kookaburra in history with 365 appearances and 243 goals – a then record.