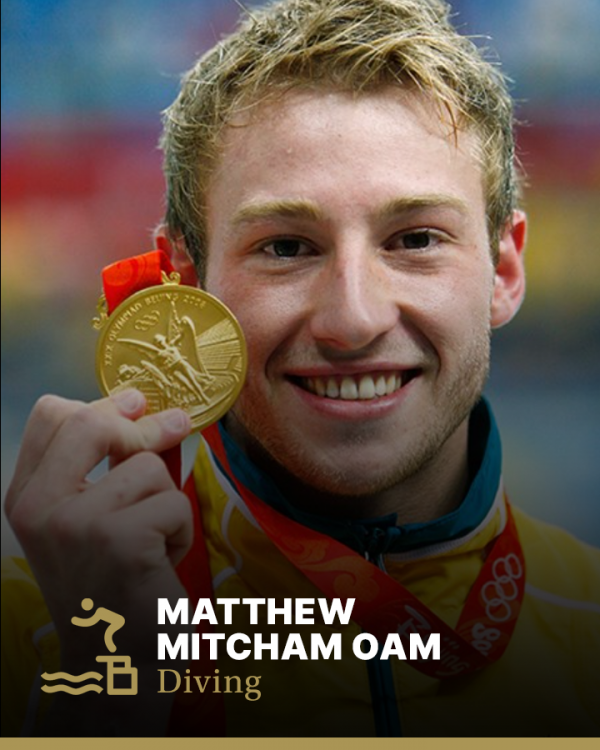 Matthew Mitcham OAM was inducted into the Sport Australia Hall of Fame in 2020 as an Athlete Member for his contribution to the sport of diving.

Matthew Mitcham rewrote the history books when, in an astonishing last-gasp performance under extreme pressure, he became the first Australian male diver in 84 years to win an Olympic gold medal at the Beijing 2008 Olympic Games, becoming just the second-ever Australian do so. Matthew is also a Commonwealth Games gold medallist and six-time silver medallist, across both the platform and springboard disciplines.

Mitcham rewrote the history books when he became the first Australian male diver to win an Olympic gold medal in 84 years, and only the second ever, when he won the 10 metre platform at Beijing in 2008 with an astonishing last-gasp performance under extreme pressure.

Mitcham’s first foray into international sport came as a trampoline gymnast when he won the double mini-tramp event at the junior world championships, before combining that pursuit with diving, making steady progress through junior and senior ranks domestically and internationally.

Matthew represented Australia at the Melbourne 2006 Commonwealth Games, narrowly missing medals in three events. Shortly after, Mitcham had fallen out of love with diving; depressed, burnt-out mentally and physically, he decided to stop competing. Throughout his 9-month break, he supported himself as a high diver at the Sydney Royal Easter Show. It was during this break that he sourced a new coach, Salvador Sobrino, and Mitcham said, “I came back with such a drive, a burning desire” , it was at this moment that his passion for professional diving was found again.

After coming back just 15 months before the Beijing Games, he returned in 2008 to win the 1 metre, 3 metre and 10 metre individual events at the national championships and the Grand Prix event in Fort Lauderdale Florida, to propel him towards his moment of destiny in Beijing.

During the Beijing 2008 Olympic Games, Mitcham produced a near flawless back two and a half somersault with two and a half twists, earning perfect scores of 10 from four of the seven judges. When the very high degree of difficulty of 3.8 was factored in, his score of 112.1 was the highest for a single dive in Olympic history and enabled him to come from behind and defeat China’s Zhou Luxin, denying the host country a clean sweep of every diving event.

Mitcham’s gold medal in Beijing was Australia’s first at the Olympics by a male since Paris 1924 when Dick Eve won the plain platform event which involved no twists and turns, a very different challenge in terms of difficulty. The feat was even more remarkable given his brief hiatus.

In 2011, Mitcham recovered from an abdominal injury to win the national 10 metre platform title which saw him achieve his selection to the London 2012 Olympic games. Whilst at the Games he finished 13th in the 10 metre event, one place shy of making the finals. Later in the year, Mitcham was named Male Diver of the Year.