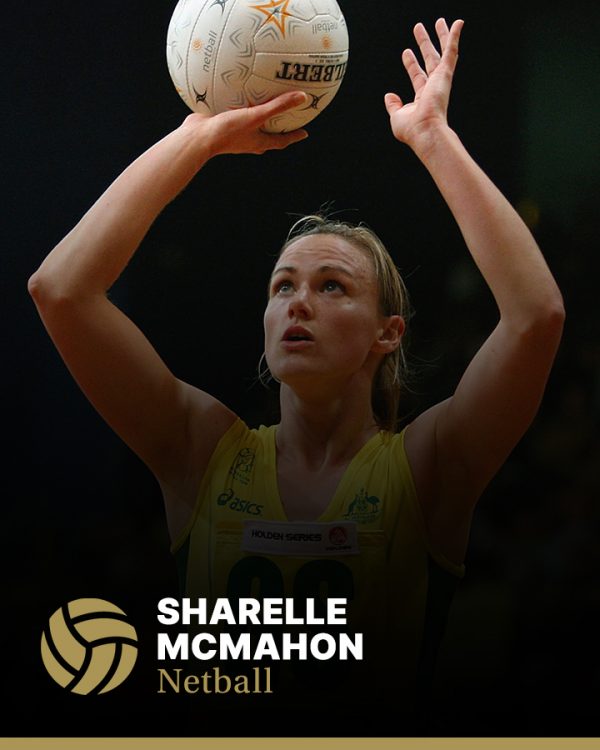 Sharelle McMahon was inducted into the Sport Australia Hall of Fame on Thursday, October 13, 2016 as an Athlete Member for her contribution to the sport of Netball.

Sharelle McMahon was one of Australia’s most successful and enduring netballers. Across her storied career, she represented her country at four Commonwealth Games, where she claimed two gold and two silver medals, and at three Netball World Cups, winning twice – most famously in 1999 when she took the final shot in the dying moments to seal a win for Australia over New Zealand.

McMahon began playing netball at the age of seven, in a team coached by her mother Olive in the country Victoria town of Bamawm, near Echuca, before she moved to Melbourne at 16 to take up a Victorian Institute of Sport scholarship. McMahon progressed quickly through Victorian junior netball ranks and gained selection in the Melbourne Phoenix team, in the newly created National Netball League, and the Australian U21 team in 1996.

McMahon made her debut for the Australian Diamonds in 1998 as the youngest member of the team that won the gold medal at the Kuala Lumpur Commonwealth Games. Between her debut and her international retirement 14 years later, McMahon represented Australia in 118 Test matches, captained the team on twelve occasions and finished with 2,520 international goals, at an enviable average of just over 21 per Test.

She captained the Melbourne Phoenix for four seasons and was a prominent fixture in the goal circle, as either goal attack or goal shooter, for eleven years, before leading the newly formed Melbourne Vixens in their inaugural season in 2008 and guiding them to their first championship win in 2009.

McMahon’s international career came to a somewhat premature end after she ruptured her Achilles tendon in an ANZ Championship game in 2011, forcing her to withdraw from the 2011 Netball World Cup. She did, however, return to the court briefly in 2012, before taking time off for the birth of son Xavier. She returned for one more domestic netball season in 2013 before retiring for good at the end of that year.