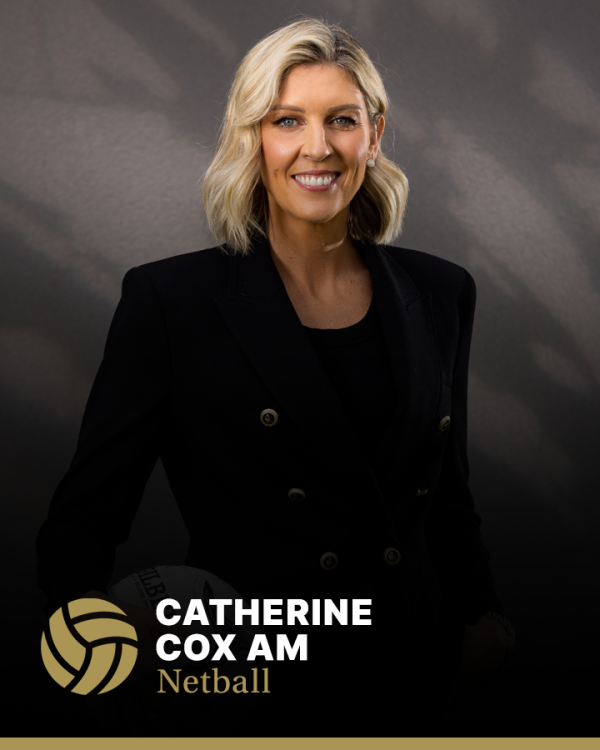 Catherine Cox AM was inducted into the Sport Australia Hall of Fame in 2022 as an Athlete Member for her contribution to the sport of netball.

Catherine Cox was one of the most decorated netballers of her generation, with her goal-shooting prowess and leadership qualities playing a key role in Australia’s successes of the era.

She represented the national team across 16 years, with 108 senior appearances from 1997 to 2013, and she was captain of the side on seven occasions.

Among the haul of medals Cox won in her time as a member of the Australian team were gold medals at the 2002 Commonwealth Games and the 2007 and 2011 World Netball Championships. She was also a member of silver medal-winning teams at the 2006 and 2010 Commonwealth Games and the 2003 World Netball Championships.

Australian netball great Catherine Cox once said of her New Zealand Silver Fern rivals: “When we see each other (on the court), we hate each other.”

That highlights the intense rivalry that has always existed between the two dominant netball countries for as long as they have met on the court.

But for a decision her parents made to move to Australia when she was six and a moment years later when New Zealand tried to get Cox to switch allegiance, she might well have become a Silver Fern rather than a Diamond.

Cox was born in Whangarei, the northernmost city on New Zealand’s North Island, in 1976 before moving to the South Island when she was only a few months old. She then moved with her family to Australia – and to Sydney – when she was six years old.

She made her debut for Australia at 21 against South Africa in 1997 off the back of outstanding form for the Swifts. But she was overlooked for the following year’s Commonwealth Games team, prompting New Zealand to enquire about whether she would represent the Silver Ferns in Kuala Lumpur. She weighed it up for a period before ruling it out.

Having missed those 1998 Commonwealth Games and the 1999 World Cup, Cox never looked back. She would go on to average more than 21 goals in 108 games for Australia as a goal shooter or goal attack, taking part in three World Cups and three Commonwealth Games.

Her decision to stick with the green and gold paid handsome dividends. She was a key member of the 2002 Commonwealth Games gold medal-winning team and also won gold medals at the 2007 and 2011 World Cup, acting as vice-captain in the latter. Silver medals came at the 2003 World Championships and the 2006 and 2010 Commonwealth Games.

Cox would go on to captain Australia in seven matches including a match against England in 2011 when she scored her 2000th goal for her country. Her longevity in the game also saw her become the fourth Australian netball international to reach 100 games, following on from Vicki Wilson, Sharelle McMahon and Liz Ellis.

Her leadership, clean hands, exquisite timing with the ball and capacity to find the goals even from a difficult range set her apart from most of her contemporaries. In 2004 and 2005 Cox was named the Australian International Player of the Year recognising the valuable contribution she had made.

She became one of those rare sportspeople to receive a fairytale farewell. Having joined the Vixens in 2014, Cox announced that she would retire from netball at the end of that season.

During that year she played her 250th combined Commonwealth Bank Trophy/ANZ Championship match before later closing out her career in the Vixens’ Grand Final triumph and setting a then record for most National League games played with 254 games, a fitting full stop on a career that shone so brightly for so long.

Her teammates gave her the perfect send-off, overpowering the Queensland Firebirds 53-42. She came on late in the game – as she did for part of that season – and helped to close the game out for her team. The emotion was almost too much for her.

“I looked up at the scoreboard with about a minute-and-a-half to go and lost it straight away. I missed the last couple of shots because I couldn’t see what I was doing,” Cox said immediately after the curtain came down on her stellar netball career. “It’s what dreams are made of.”

Since her retirement from the elite level Cox has been a regular netball commentator providing great insight to the sport.

Cox’s contribution to netball was further rewarded when she was made a Member of the Order of Australia in 2022.