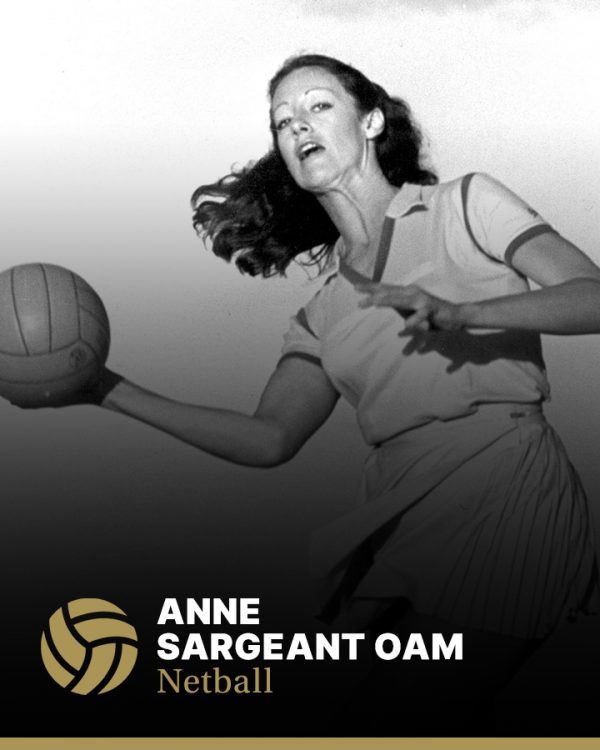 Anne Sargeant OAM was inducted into the Sport Australia Hall of Fame in 1987 as an Athlete Member for her contribution to the sport of netball. She was elevated to Legend of Australian Sport in 2015.

Sargeant began playing netball at the age of eight and went on to represent Australia for eleven years from 1978 to 1988, captaining the team for six years from 1983 until her retirement in 1988.

Sargeant played in three World Championships, the last as captain. In 1979 she helped Australia to equal first place sharing the title with both New Zealand and Trinidad & Tobago. In 1983 she led as Vice Captain the Australian team to victory over New Zealand in Singapore and as Captain to an equal second with Trinidad and Tobago in Glasgow in 1987.

Sargeant also captained the Australian Team at the World Games in 1985, the inaugural Australian Games in 1984 and on a 1984 tour of New Zealand. Among many international highlights, a standout was the 1985 tour of Wales when she captained an undefeated Australian side and posted a career personal best of three consecutive 100% shooting games.

She complemented her Australian captaincy with captain-coaching the Manly-Warringah in New South Wales to six straight state titles in the 1980’s and captaining NSW to victory in 4 National Titles (1984, 1985, 1987 and 1988). She was honoured by the MWNA as Patron and Life member of MWNA for her tireless work in the areas of coaching, selection and appointments panel roles.

Sargeant was also inducted into the NSW Hall of Champions in 1988 and Elevated to Legend in 2014, becoming the first Netballer to hold Legend status. She was awarded the Medal of the Order of Australia (OAM) in 1988 for her service to netball and in 2003 was named “Sydney’s Greatest Netballer Ever”.

Following her retirement from National and International playing Sargeant has continued to contribute to Netball, firstly through coaching at the NSW level and subsequently as National Selector for the Australian Diamonds, a post she holds today. She has also made an enormous contribution as an outstanding netball media commentator.

Inspiration: “There is no end point to success”