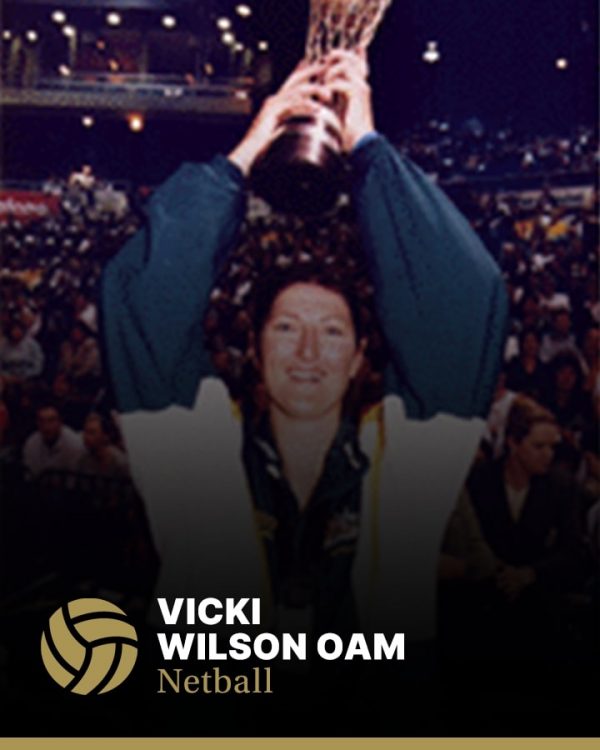 Vicki Wilson OAM was inducted into the Sport Australia Hall of Fame in 2004 as an Athlete Member for her contribution to the sport of netball.

Wilson represented Australia for 15 years between 1985 – 1999, the last four as captain, and was arguably the world’s best goal shooter for the majority of her career.

Originally a defence player, she always wanted to be a goal shooter and got the chance when playing for the Queensland Under 18 team. She was so successful she never played defence again and Australian netball will be forever grateful she made the switch to shooter.

At the Under 19 championships, she was identified by the Australian Institute of Sport as a potential future Australian representative. However, still a student in the Physical Education course at the Queensland University of Technology, she decided against the move at the time.

Eventually at the AIS, Wilson excelled under the guidance of specialist goal shooting coach, Margie Caldow and was among a new generation of players who were determined and aggressive on the court. She first played for Australia in 1985, when she was 20. She continued to represent Queensland as captain of the Firebirds team in the national competition, a challenging position because many of the team in the early days were young and inexperienced.

In 1996, Wilson was honoured with the captaincy of the Australian team, rewarding her for over 14 years of outstanding service to the national side. She captained the first-ever gold medal winning team in the 1998 Kuala Lumper Commonwealth Games in September 1998, defeating New Zealand 42 to 39 in a thrilling match.

At the time of her retirement from representative sport, Wilson was the world’s greatest goal shooter and one of Australia’s most recognised sporting personalities. She was also the most capped Australian netballer having played 104 Test matches. She is the only Australian player to have played in four World Championships, winning three in 1991, 1995 and 1999, the last as captain. She was a Member of the Australian World Games teams in 1985, 1989 and 1993.

Wilson has always been committed to the future development of the sport she loves. She was the founder and coordinator of the Secondary Schools Netball championships. As well as her coaching activities, Wilson is a member of the board of the Queensland Academy of Sport, the Gabba Trust, the Womensport Queensland Board and the Centenary of Federation committee. She also commentates with the ABC and is the Sports Officer for the Queensland Education system.

1992: Awarded the Medal of the Order of Australia (OAM) for her part in the 1991 World Championship victory