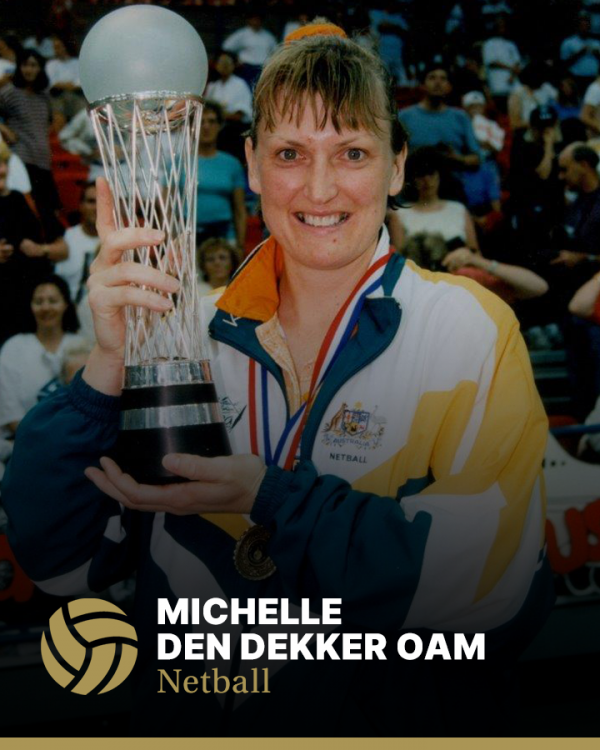 Michelle den Dekker OAM was inducted into the Sport Australia Hall of Fame in 2020 as an Athlete Member for her contribution to the sport of netball.

Michelle den Dekker is one of Australian netball’s most successful captains. She is a two-time World Champion, having led her team to victory in 1991 and 1995. She also won gold at the Auckland 1990 Commonwealth Games. Michelle led a dominant Australian team to a remarkable 92 per cent -win ratio in a record 71 matches as captain. Widely considered one of the best and cleanest defenders to ever play for the Australian team, Michelle also played for the Adelaide Ravens and was voted the greatest netball player to ever come out of South Australia.

She is one of the Australian netball team’s most successful captains, leading them to world championships in 1991 and 1995 and to victory at the Auckland 1990 Commonwealth Games, when netball was a demonstration sport. She was widely considered one of the best and cleanest defenders ever to play for the Australian Netball team.

After graduating from club level to the South Australian team in 1984, which she represented for a decade, den Dekker made her debut for Australia in 1985. She played 84 Test matches, including, a record 71 as captain. During den Dekker’s captaincy, she led a dominant team winning 65 matches, leading to a remarkable winning of 92 per cent. Other captains have had higher winning percentages but only after a handful of Tests, not with her longevity.

Her period as captain was considered to be a golden era for the Australian Netball team with many team-mates going on to become greats of the sport.

Den Dekker played for one South Australian team, the Adelaide Ravens, and coached another, the Adelaide Thunderbirds in the National Netball league, and was voted the greatest netball player South Australia had produced. She also captain-coached the Queensland Firebirds, became an assistant  coach of the Australian Diamonds between 2013 and 2015 (including the Glasgow 2014 Commonwealth Games and World Cup gold medals) and the head coach of Netball Australia’s Centre of Excellence in Canberra in 2014-2015. Michelle is currently the assistant coach for the National 21’s team and defence coach of Netball Australia’s underage programs.

Commentator Liz Ellis, a Sport Australia Hall of Fame Member herself, said den Dekker’s strength as a captain was leadership by example. “Her track record is extraordinary, the only player to lead Australia to two World Cups.”

“She was one of the fittest players ever, massively committed to that aspect of her game. Her physicality and super strength were amazing.” Ellis said.