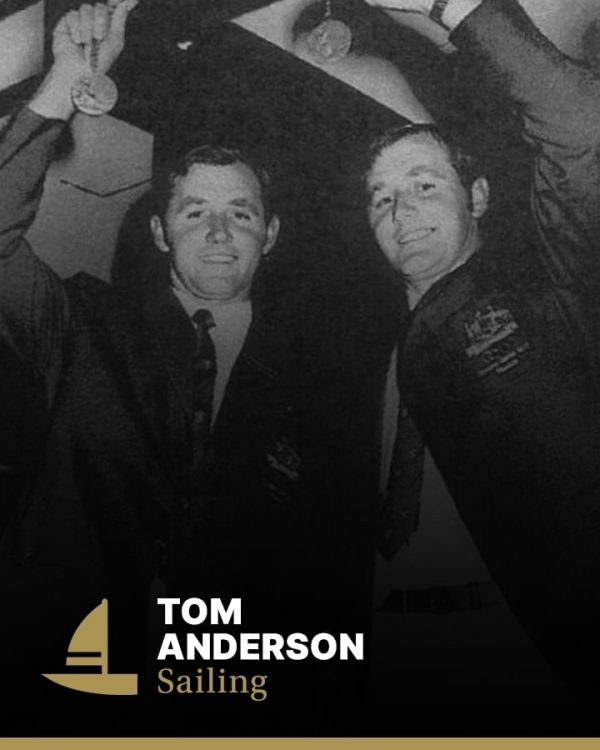 John and Tom Anderson imparted an extra dimension to the Australian Olympic team’s results at the 1972 Munich Olympics. They set a new Olympic record by becoming the first twins in history to win gold medals in separate events at the same Olympics. This record still stands today.

More than 700km away from the hub of the 1972 Munich Olympic Games, Australia’s sailing team made their own strong contribution to the nation’s Olympic history. The sailors scored an unprecedented two gold medals for Australia.

After arriving in Europe for the Games, the Dragon crew took part in regattas in Denmark and at Travamundi, near the border of East and West Germany, with only average results.

As they worked to tune ‘Wyuna’ for the Olympic series, they had some tryouts against the Canadian and New Zealand boats, and found that their boat was simply too slow. When the Canadian skipper outfitted his craft with new sails, he offered the old ones to Cuneo. The offer was promptly accepted, and at the same time the Australians tried out a new headsail. With some more adjustments, the boat was ready.

She began magnificently, winning the first three heats. Then came a disastrous performance in the fourth race, which Cuneo later explained. “The problems started when we decided to sail conservatively so as to consolidate our position, not taking risks. We tacked before we should have and sailed back into the fleet where we felt our main competitors were. We got buried and were never able to recover, finishing 19th.” The fifth race was abandoned on a windless day when none of the boats were able to complete the course, and in the next heat the Australians finished third. By the last race all they needed to do was finish the race, remain undisqualified, and finish 18th or better. They stayed close to the front all the way, and finished fourth. “I knew we had the gold medal in the bag after we’d gone 100yds” Cuneo later said, “It was a piece of cake”. They won gold, 28 points ahead of the East Germans

Anderson’s other successes include winning the Australian dragon class championships in 1968, 1969 and 1974 and the Australian star class championship in 1978. In 1977 Anderson competed in the Admiral’s Cup Trials, and in 1977 and 1982 the Brisbane/Gladstone Ocean Races. In 1977 and 1983 he sailed in the Sydney to Hobart races, and in 1982 sailed in the Pan-Am Clipper Cup series in Hawaii.