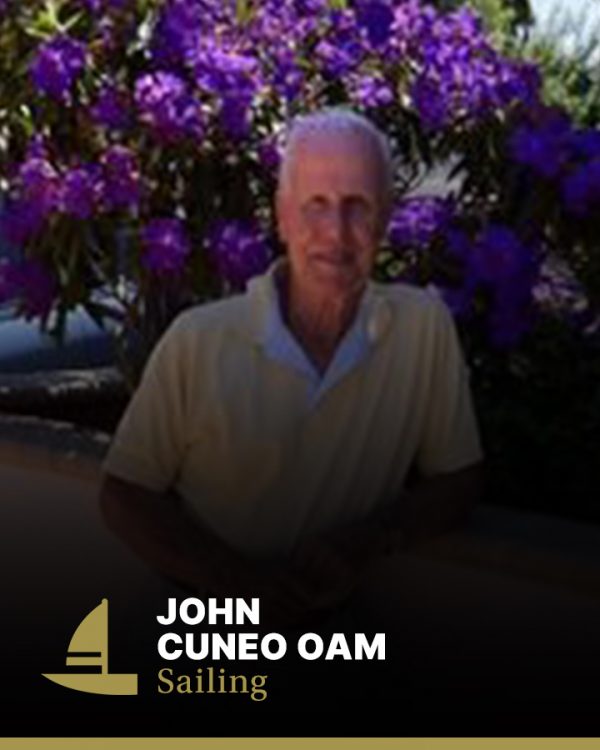 John Cuneo grew up in the tough competitive world of Sharpie sailing. He was the national champion in the 18 foot Sharpie class in 1956, 1958 and 1960 and in the lightweight Sharpie class in 1961, 1962, 1964 and 1965. Later in 1965 he moved into the international 505 class to compete in the world series in Adelaide. Without prior competition in the class, he won the Australian Championship and then finished third in the world series.

Moving into the international Dragon class, he won the Australian Championship in 1968/69. He represented Australia at the 1968 Mexico Olympic Games with Tom Anderson and John Ferguson finishing fifth in the competition. This was the best result Australia had achieved in this highly competitive class, but Cuneo was unhappy with it. He then set himself a four year goal to win selection for the 1972 Munich Games and to prove himself the best in the world.

During these four years he won the English Speaking Union Dragon Championship and the Australian Dragon championship in Brisbane in 1969. Following this he went to Majorca, Spain, but narrowly missed the World Championship by one point.

The selection races for the 1972 Olympics almost saw the dream slip away. Suffering from a bowel infection, he and his crew of Tom Anderson and John Shaw fought back from third midway through the series to win by .6 of a point.

More than 700km away from the hub of the Olympics, Australia’s sailing team made their own strong contribution to the nation’s Olympic history. The sailors scored an unprecedented two gold medals for Australia.

After arriving in Europe for the Games, the crew took part in regattas in Denmark and at Travamundi, near the border of East and West Germany, with only average results.

As they worked to tune ‘Wyuna’ for the Olympic series, they had some tryouts against the Canadian and New Zealand boats, and found that their boat was simply too slow. When the Canadian skipper outfitted his craft with new sails, he offered the old ones to Cuneo. The offer was promptly accepted, and at the same time the Australians tried out a new headsail. With some more adjustments, the boat was ready.

She began magnificently, winning the first three heats. Then came a disastrous performance in the fourth race, which Cuneo later explained. “The problems started when we decided to sail conservatively so as to consolidate our position, not taking risks. We tacked before we should have and sailed back into the fleet where we felt our main competitors were. We got buried and were never able to recover, finishing 19th.” The fifth race was abandoned on a windless day when none of the boats were able to complete the course, and in the next heat the Australians finished third. By the last race all they needed to do was finish the race, remain undisqualified, and finish 18th or better. They stayed close to the front all the way, and finished fourth. “I knew we had the gold medal in the bag after we’d gone 100yds” Cuneo later said, “It was a piece of cake”. They won gold, 28 points ahead of the East Germans. The other Australian gold medal was won by John Anderson and David Forbes.

In 1974, Cuneo was designated as helmsman of ‘Southern Cross’ in the America’s Cup. At the last moment he was replaced but sailed as tactician in the 3rd and 4th heats. In 1980, Cuneo was appointed as the Olympics Yachting Coach. In all he won over 60 Championships in eight different classes.