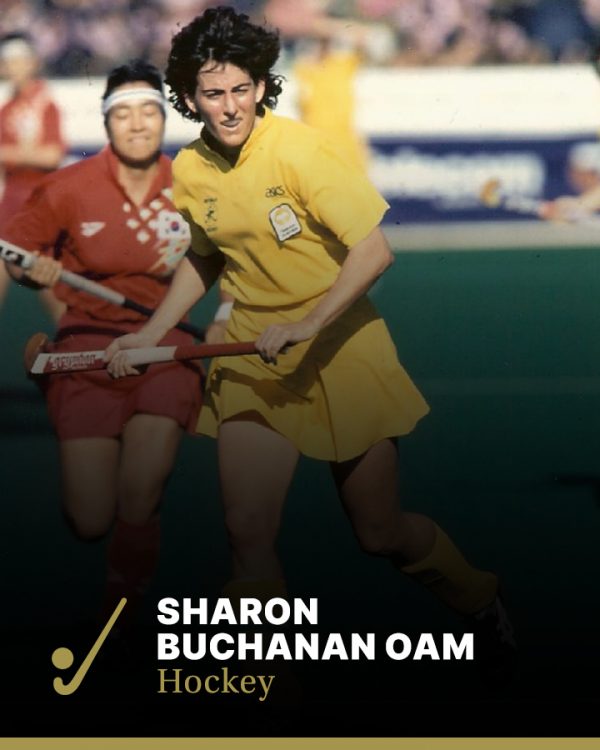 Sharon Buchanan OAM was inducted into the Sport Australia Hall of Fame in 1994 as an Athlete Member for her contribution to the sport of hockey.

Buchanan started playing hockey at the age of four in her home town of Busselton, Western Australia, but as a junior played most sports including tennis, swimming, basketball, softball, and gymnastics. Her talents lay mostly in hockey and her career began with selection in the Western Australia State Under 16 hockey team in 1975, at the age of 12. She captained the team in 1978 before moving to the Under 19s and captaining the team in 1979. She went on to play for Australia from 1980 to 1993 (including four Olympic teams from 1980 to 1992), captaining the team from 1989 to 1993 at a time when Australia was considered the best in the world.

Originally playing inside forward, Buchanan later chose the centre-half role and attended the Australian Institute of Sport in Perth in 1984 and 1985. She represented Australia in international competition in 186 games, which, at that time, was a record in Australian hockey.

In her first Olympic competition at the 1984 Los Angeles Games (the 1980 Olympics were affected by the boycott following the USSR’s invasion of Afghanistan in 1979), Australia finished fourth. Four years later in Seoul, Australia won gold, eliminating the favoured Dutch team 3-2 in the semi-finals and then beating the home team, South Korea, 2-0 in the final. Buchanan scored both goals and was named in her first World Team. At the 1992 Barcelona Games, Buchanan was selected as captain however the Australians weren’t as successful as four years prior and were upset 1-0 in the preliminaries by the Spanish hosts. In 1992, Buchanan was a Member of the Olympic Athletes Advisory Committee.

Buchanan played in four Champions Trophies teams between 1987 and 1993, winning two silver medals – Holland 1987 and Frankfurt 1989 (captain) – and two gold medals – Berlin 1991, and Holland 1993. Buchanan was named Player of the Tournament after the 1991 victory and earned a place in the World Team for the third time.

Since her retirement in 1993, Buchanan has been a board member of the Australian Sports Drug Agency, a Committee Member of the National Hockey League from 1994 to 1996, and coach of a number of regional hockey teams.