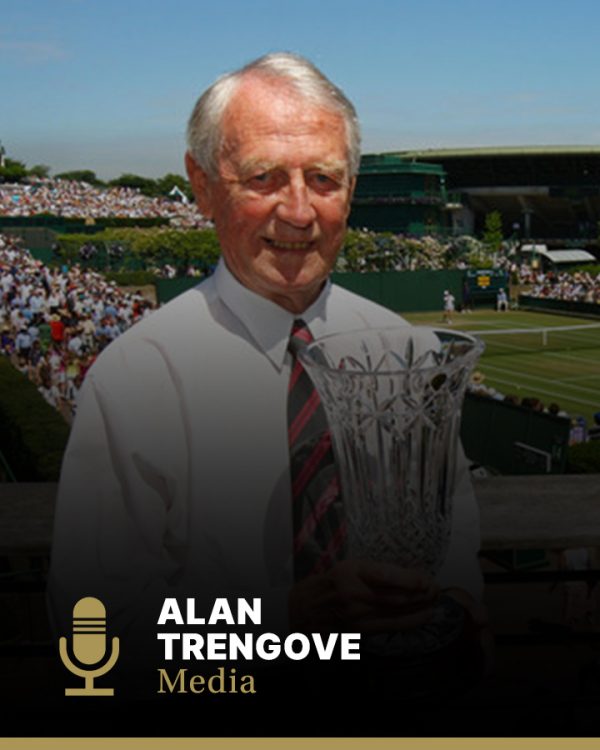 In 1945, Alan Trengove began his career in journalism as a copy boy on Reuter’s sports desk, Fleet Street, London. Subsequently, he became a reporter on Fulham Gazette, a London suburban weekly, before accompanying his parents to Australia in 1949 and settling in Melbourne.

From 1950 to 1952, Trengove reported for the Wagga Wagga Daily Advertiser before returning to Melbourne to work at the Australian Broadcasting Commission. He then joined The Argus as a sports writer, specialising in tennis and golf, but also covered other sports such as track and field, professional running, and cycling.

In 1955, Trengove joined The Sun-News Pictorial, again specialising in tennis and golf, but writing on other sports aswell, and he later became a member of The Sun team that covered the 1956 Melbourne Olympic Games. He continued to cover tennis and golf, but increasingly wrote special articles on a wide range of topics for The Sun’s features department. During his time at the Sun until 1960, he ghosted Lou ‘kiss-of-death’ Richards, and helped to consolidate Lou’s image as a lovable larrakin. In 1960, he also collaborated with Herb Elliott in a book titled The Golden Mile.

From 1961 to 1965, Trengove was the London correspondent for the Melbourne Herald group where he covered his first Wimbledon and French Championships, and the British Open Golf Championship. In 1964, he covered the Australian Test team’s tour of England, captained by Bob Simpson, and wrote a book called The Art of Tennis with the world’s best tennis players, from Hoad and Rosewall to Gonzales and Trabert. It was published in eight languages.

From 1964 to 1976, Trengove was a special writer and columnist for The Sun News-Pictorial, but continued to write many features on tennis and other sports. Among the ‘legends’ he interviewed were Don Bradman, Stan McCabe, Clarrie Grimmett, Jim Pike (Phar Lap’s jockey), George Moore, Neville Sellwood, Margaret Court, Evonne Goolagong, Norman Brookes, John Bromwich, Rod Laver, Ron Barassi, and Ted Whitten.

During this time, Trengove also wrote for Reader’s Digest. One article in 1978 was the first substantial report of performance enhancing drug taking. Titled Super Athletes -or Monsters? it was the lead article in the US edition and delivered to 100 million readers.

In 1966, he collaborated with Ron Clarke in a book called The Unforgiving Minute, as well as covering the Kingston British Commonwealth Games in Jamaica. Two years later, he covered the 1968 Mexico City Olympics and Lionel Rose’s world title fight against Fighting Harada in Tokyo.

In 1971, Trengove went to South Africa to study effects of apartheid, particularly on sport, and wrote a lengthy series of articles published in The Sun and other papers across Australia. The series preceded the scheduled Springbok cricket tour of Australia, which was subsequently cancelled.

After retiring from the Herald & Weekly Times in 1976, Trengove continued to write for, at various times, The Bulletin, Sydney Morning Herald, New York Times, the Independent (England), and the Canberra Times. In 1976, Trengove, with John Brown, co-founded and edited for about 15 years, the Australian Tennis Magazine. The magazine is now published by Nicholson Media Group. Trengove’s column in the magazine, Court Talk, may be Australia’s longest-running sports column -it has continued uninterrupted from January 1976 to the present day.

From 1985 to 2000, he was a Member of the International Tennis Federation’s Media Commission, and in 2000, was accredited to the Sydney Olympics for the Australian Tennis Magazine, making him one of a few sportswriters to be accredited to both the 1956 and 2000 Olympic Games.