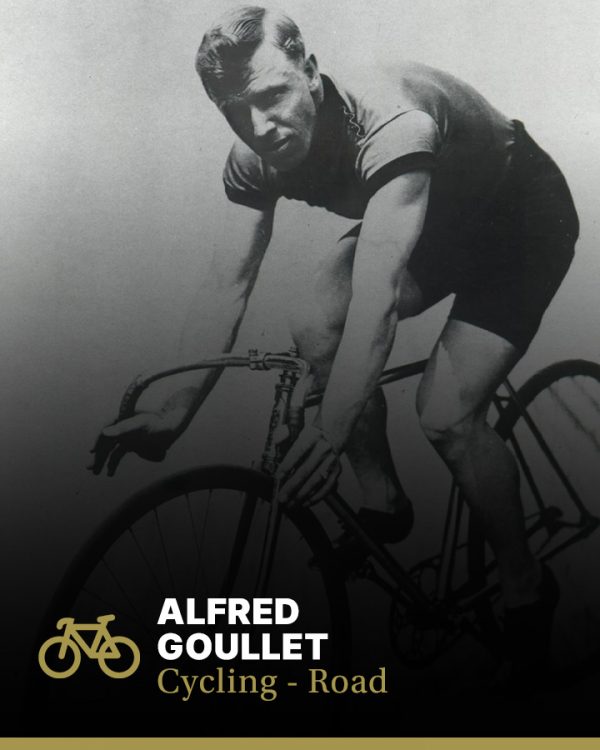 Alf Goulett proved to be one of the greatest all round riders the world has known. A marvellous six day rider, he would ride hours on end, have a quarter of an hour break and then be ready for another hour or so. In sprint, scratch, handicap, or pursuit races, he had few equals.

He began racing in 1908. He was a bit erratic at first, but he didn’t take long to start winning races. Victories in 1909 in Ballarat, indicated that he was going to develop into a world class rider. Before the end of the season, he was riding off the honour mark. He then travelled to the USA.

Goulett made his debut at Newark, USA, in 1910. Although the opposition was much tougher than in Australia, he rose to the occasion and was very soon winning races. So impressed were the promoters that they matched him against the great Frank Kramer in a pursuit race. This was considered a tough proposition for the Australian, even though the American champion did not show to his greatest advantage in unpaced events, but Goulett, riding with determination and great judgement, wore his opponent down after 15 miles of sensational riding.

Alf’s next engagement was a 10 mile paced match against Eddie Root. In winning, he showed the sports fans he was just as good in those kind of events as in the unpaced races. Root forced the pace, but Goulett held him and opened up in the last mile, winning with plenty to spare.

Joe Fogler, a rider of proved ability, was his next victim at pursuit racing. Then Peter Droback was lined up and he suffered a similar fate. Goulett’s riding was so convincing in the pursuit races, that he was called the “Pursuit King”. Kramer was brought out again to stop his march, but the Aussie proved his previous victory was no fluke and finished the day winning the 10 mile scratch race. In this, his opening season in the States, Goulett created a wonderful impression.

At the start of the 1911 season, Alf ran fellow Australian Jack Clarke to inches in the five mile national championship. In a three mile scratch race he won in the time of 5:40.24 seconds. Twenty events of all description were won by Alf and to finish off, won a six day race teamed with Paddy Hehir.

Goulett returned to Australia at the end of the 1911 season to take part in the six day races. Teamed with Paddy Hehir, he secured first place in both events run in Sydney and Melbourne. His finishing sprint at the end of the long journey thrilled the big crowd. At meetings run in Sydney after the six day races, Alf won two handicaps the first night and two more the following night.

Back in the States in 1912, Goulett put up one of the greatest rides ever witnessed at Newark. In a three man pursuit race, Australia against America, he left his team mates and caught Fogler, Root and Hill in a little over three miles. He was given a standing ovation. Three days later, in direct contrast to pursuit racing Alf won the quarter mile national championships.

1913 saw Alf race in Europe under Floyd McFarland. His first race was against Victor Dupre (world champion sprinter 1909). Riding brilliantly, Goulett won two out of the three heats. He then won a six day race in Berlin teamed with Joe Fogler. During his stay he created a great impression by his all round ability. He did not race the full season, returning to America to fulfill engagements.

He again displayed great speed and defeated Frank Kramer in the Newark Thousand by inches. In fact, he defeated Frank five times in a month. Alf also scored over Alf Grenda and Clark in a series of events and, in the battle for the sprint crown, he was defeated by a few points. Then he teamed with Fogler again, winning the six day race in New York, recording 2751 miles.

The Australian kept up his all conquering form in 1914. He scored over Walter Rutt and Kramer in the quarter mile championship, then, to show them it was no fluke, defeated them again in a tandem paced match. With Frank Corry and Gordon Walker in a teams’ pursuit race against an American team, the Aussie’s ran out winners in 3:38 seconds for two miles. In an event titled the “Goulett Prize”, Alf rode so fast there was no disputing the fact that the event was aptly named. Alf’s greatest performance was also in 1914 in a race at the Sussex Avenue Armory in Newark with Freddie Hill as a partner. Hill was injured and retired from the race about half an hour from the finish. Alf finished the race without a partner and won all but two of the sprints.

Another sample of his speed was when he won all heats of the three cornered race against Rutt and Clark. The 10 mile championship was another example of all round riding. Before a record crowd and amid great excitement, Goulett downed Kramer in a continental match race, but the American got his own back by defeating Alf in the Grand Prix of Newark. Two more six day races and the all round championship were added to his fast growing list of successes and, in the sprint title, Alf again finished second.

Season 1915 was perhaps the greatest of Goulett’s amazing career. He scored in all classes of races but it was in the scratch and match events that he was most comfortable. His duels against Kramer were features of the season, both were level on points for the national sprint championship. They decided on a run off. A great race resulted in victory for the American.

Goulett’s first big win for the season was the Criterion Purse, a one mile scratch race worth £200 to the winner. The final comprised Goulett, Kramer and Moretti from Italy. The race was restarted on five different occasions owing to the bitterness of the riders in regard to pacing and jostling of positions. Finally, after a terrific struggle, Goulett defeated Kramer by inches. Alf then went on to win the two mile championship.

Goulett’s winnings for the season amounted to £1500. Besides that amount, he received appearance money and bonus money.

In 1916, Goulett was again in the form which characterised previous years and in winning the one mile championship, excelled himself, but he went down to Kramer after a bitter struggle in a great match race in Boston.

Season 1917 was a repetition of the previous ones for Alf. He won the all round championship with 112 points, and in the sprint championship he defeated all but Arthur Spencer. Alf continued his record breaking run during the next few years. He scored in all events, handicap, sprint, pursuit, and six day races. Alf’s most notable six day performance was in 1921 with Maurice Brocco as his partner. Reggie McNamara and Eddie Madden had been running away with the race but in the final hour Alf won thirteen of the last seventeen sprints and Alf and Brocco won the race. In 1923, he again gave a great display in winning the all round title.

In 1924, Goulett gave an idea of his greatness, not only of his all round ability, but as a match rider, by scoring the greatest number of points for the season. He competed in 31 match races winning 18, finishing second in 11 races, and third once, comprising 126 points, scoring the best percentage. He also finished third in the all round championship with 15 firsts, nine seconds, and six thirds.

Alf Goulett enlisted in the US Navy just after winning a New York six day race. He served for 14 months at the Naval Air Station at Cape May, New Jersey.

In 1961 he was elected to the American Bicycle Hall of Fame.