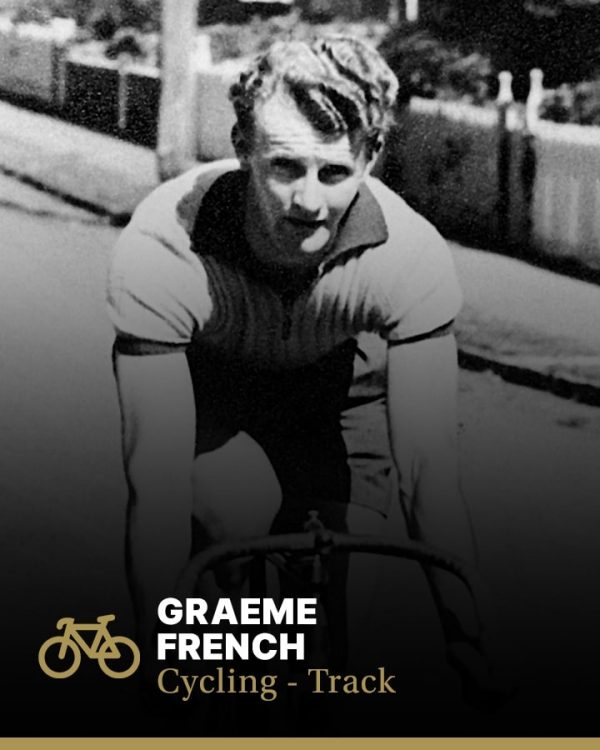 When Tasmanian cyclist Graeme French won the world motor paced cycling championship in 1956, he was honoured with a civic reception by the Mayor of Antwerp, and presented with a bronze medallion. This was given to French to show the pride of the people where he was living at the time. His win made the headlines in European papers but in Australia, his feats went practically unnoticed.

French competed in his first race at the Burnie Club event in 1942, aged 15. At first he attracted little notice though he raced consistently. His first big win came when he surprised the crowds by winning easily the Burnie Wheel race at the age of 16. The following year he was second in the ten mile, but easily won the five-mile.

At about this time, French decided to try his luck on the Melbourne hard board track in Essendon. He gradually became used to the feel of the track with its steep banks and rough wooden surface. He held his own with all the stars until in the 1950/51 he emerged in a class of his own, winning the board track all round championship, the ten and five mile Victorian championships, and the Commonwealth Jubilee Australian ten-mile title.

On a trip to Noumea in 1953, French tried himself out behind the motorcycle in a race against one of the French locals. He went so well that a former French motor-pacing cyclist advised him to “go to the Continent and see if you can win something”.

He arrived in Antwerp, Belgium, unheralded and unsung. How would an inexperienced Tasmanian be able to make a showing against the giants of the motor pacing world? But one man recognised his talent right from the start. He was Grolimond, a famous Swiss motor-pacing star -the one who rides the motorcycle, and he sent word to French that he would come out of retirement to help him.

To consistently win motor paced races a cyclist must have a good pacer. He must have a man who is aware of all the tricks of the trade, such as when to attack, and how to counter crowding tactics. And so an unusual team was formed, a worn out Swiss pacer, still wise in the ways of the sport, and the inexperienced Tasmanian.

Soon the team began to string together a succession of wins. When the world title race came around, French was determined to show the people of Copenhagen that even if he could not win, he was capable of a good performance.

His morale received a terrific boost just prior to the race, when pacing behind a Derny cycle (a small motorcycle) he broke the world record for one hour. The previous record was 58km, 586m, and 84cm. French recorded 59km, 98m, and 129cm.

After the favourite for the world title, Verschueren from Belgium, had beaten Jakobi from Germany in his heat with a distance of 64km, 750m for the hour, the race was considered as good as over. Then the Spaniard Timoner won the second heat with 65km covered. In the third heat, French’s main rival was Bucher from Switzerland, who had finished second in the title the previous year. After a struggle, French won the heat.

The line up for the final was Verschueren, Timoner, Kock from the Netherlands, Frenchman Godeau, Jakobi, Bucher, and French. In spite of the fact that French had drawn the coveted number one position, he was far from confident. He felt the distance could prove his undoing, but he had not counted on the whiplash commands that were to come from Grolimond. Nor had he taken into account his own ability to rise to the occasion as had been shown throughout his career in Australia.

To the spectators, who numbered 50,000, the actual final was an anti-climax, French led from start to finish. After covering 24km of the scheduled 100km of the final, he began to suffer from the continual strain imposed by the 60 mile/hour average speed. At last the final lap came, and he won by 22yds. So fatigued was French after his effort, that he broke down completely at the presentation ceremony.

His winning time on the difficult Copenhagen track was a new world record and in winning, joined a number of other Australian’s to win cycling world titles, including Bob Spears, Sid Patterson, and Jack Hoobin.

Following his win, French then had to undergo the nerve racking grind of a succession of challenge races which attracted the fantastic and fanatic crowds. But before those races, French returned to his adopted home, Antwerp, to receive the acclaim of the people who by then regarded the shy Tasmanian as one of their own, despite the fact that their own champion Verschueren had been defeated. A large gathering at the civic reception in the city hall testified to the esteem of French was held in on the Continent.

In quick succession came wins in the International Grand Prix of France, the Grand Prix of Amsterdam, the Grand Prix of Holland, the Grand Prix of Paris, the Ploum Ploum Antwerp, and the Golden Wheels of Munchen and Kohn in Germany. He also finished third in the 1957 world title and though he doesn’t admit to not really punishing himself, he did say to his father that if he’d won, Grolimond would never had let him return home.

French returned to Australia and began racing again in Victoria. He immediately met with success and among other good performances was second in the Latrobe five mile behind Sid Patterson. He found the different style of racing hard to become accustomed to, after riding the motor paced cycle with its smaller front wheel, for so many years. French won every motor paced race he rode in on the Melbourne track following his return from the Continent and also put up record breaking rides at Latrobe.