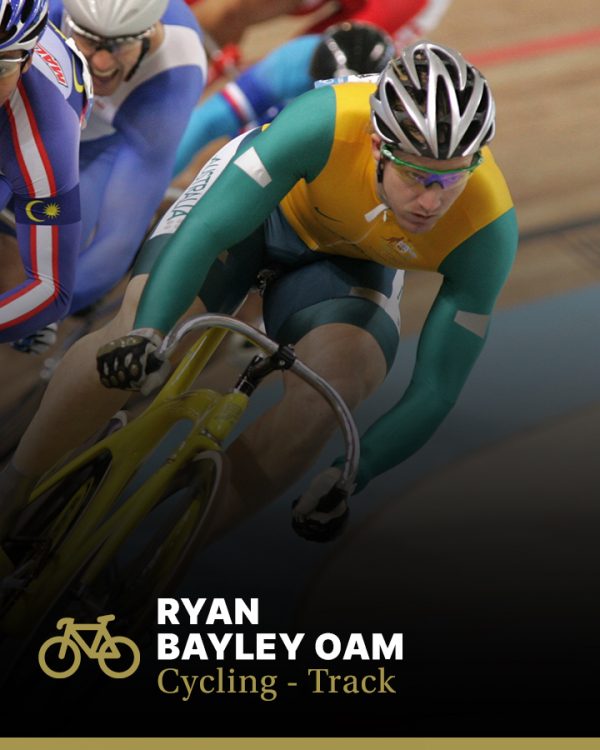 Ryan Bayley OAM was Inducted into The Sport Australia Hall of Fame in 2015 as an Athlete Member for the sport of cycling.

Bayley was the spearhead of Australia’s hugely successful track cycling campaign at the 2004 Olympic Games in Athens which produced a record 11 gold medals, two silvers and three bronze.

The powerful young Western Australian stamped himself as the fastest man on two wheels as he won the sprint and the keirin, becoming the first Australian cyclist ever to have won two individual Olympic gold medals.

Bayley, who began competitive cycling in Perth when he was 15, won the sprint and teams sprint events at the 2000 Junior World Track Championships in Italy, and was a dual Commonwealth Games gold medallist at Manchester in 2002, where he won the sprint and team sprint, and again in Melbourne four years later, winning the keirin and the sprint. He was the 2001 world keirin Champion and also won two silver and two bronze medals across eight world championship appearances between 2001 and 2008.

At the 2004 Olympic Games in Athens, Bayley won the individual sprint gold after overwhelming world champion, Theo Bos of the Netherlands, 2-1 in the final. Bos won the first of their three tense encounters, and looked well placed to take the second when Bayley summoned up enough fast-twitch force to throw his bike across the line, a trick he had learned as a junior BMX champion. In the final shoot-out he passed Bos on the final curve to win.

His second victory came in the eight-lap roughhouse event known as the keirin. He said the keirin, partially paced by motor-bike, suited him: “It’s a lottery, like dodgem cars. It’s insane.”

Four years later at the 2008 Beijing Olympic Games Bayley finished eighth in the keirin, 11th in the sprint and just missed a bronze medal in the team sprint by 0.008 of a second. He announced his retirement in June 2009.