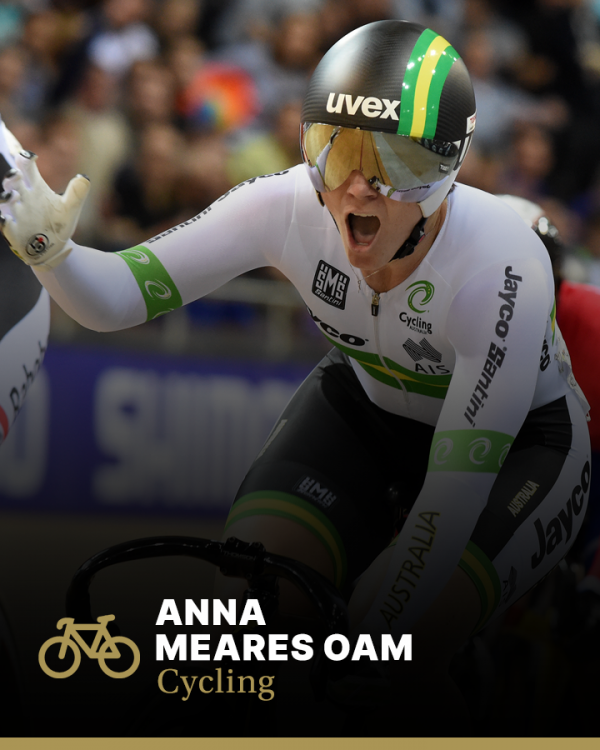 Anna Meares OAM was inducted into the Sport Australia Hall of Fame in 2021 as an Athlete Member for her contribution to the sport of cycling.

Anna Meares is widely regarded as one of the greatest track cyclists that Australia has ever produced after having won 11 world championships and six Olympic medals including two gold over a 14-year cycling career.

Meares’ four Olympic appearances saw her complete a set of Olympic medals with a total medal tally of two gold, one silver and three bronzes and became the first Australian athlete to win a medal at each games she competed in. Seven months after crashing and fracturing her neck, Meares took home her silver at the 2008 Beijing Olympic Games. However, her rivalry with British cycling great, Victoria Pendleton, became one of the great storylines of her career, along with the tactics developed with her coach Gary West and team.

Meares became a multi event world champion finishing up with 11 gold, 9 silver and 6 bronze from the four events; 500m time trial, team sprint, sprint and keirin over her long career. Anna set multiple Olympic, Commonwealth and World Records as well as being the Australian Olympic team flag bearer at the Rio 2016 Olympic Games.

Meares was inspired to take up track cycling after watching cyclist Kathy Watt at the Victoria 1994 Commonwealth Games in Canada. Anna’s father would search for the nearest velodrome in Mackay, more than 300 km from their family home in Middlemount. After a two-year sacrifice of driving their two daughters to Mackay on a weekly basis, Meares’ parents moved to Rockhampton where Anna and her sister Kerrie would gain better access to coaches.

At the Manchester 2002 Commonwealth Games, Meares made her international debut and while Kerrie walked away with two gold medals, Anna took home her first medal at a major open age competition winning bronze in the sprint event. Two years later, Meares made her first Olympic appearance after her sister withdrew due to injury avoiding an emotional battle for the only spot on the team.

Just prior to the Athens 2004 Olympic Games at the Melbourne 2004 World Championships, Meares won the first of her eleven World Championship titles in the 500m time trial. At the Olympic Games later that year Meares won her first Olympic gold medal in the 500m time trial setting a world record time of 33.952 becoming the first woman in history to ride sub 34 seconds and the first Australian female to win Olympic gold on the velodrome.

In 2006 at the Melbourne Commonwealth Games Meares had a chance to line up with sister Kerrie to compete in front of a home crowd and their family. Kerrie took home two bronze medals while Anna would take out gold in the 500m time trial and silver in the sprint.

In 2008, just seven months out from the Olympics, Meares crashed in a World Cup competition in Los Angeles. Her resulting injuries included; torn ligaments, bruising, a dislocated shoulder and fractured C2 vertebra, a mere 2 millimetres from a clean break. Just 10 days after the accident, Meares was back on a training bike determined to make a comeback in time for the Beijing 2008 Olympic Games. Meares made the finals of the sprint event but took home silver after her eventual new-found rival, Victoria Pendleton, took out a best of three races.

Two years later at the Delhi 2010 Commonwealth Games, Meares had a successful competition winning three gold medals in the individual sprint, team sprint and the 500m time trial all under her new coach Gary West who had come on board the previous year. After competing at the 2011 World Championships and winning gold in the team sprint, sprint and keirin, Meares became the first in her sport to be a World Champion in every discipline she competed in.

The following year at the Melbourne World Championships, Meares entered as the favourite for several events and finished the meet with bronze in the sprint along with a World Record in the qualification, silver in the team sprint and gold medals in the keirin and the 500m time trial accompanied with another World Record.

During the lead up to the 2012 London Olympic Games, Meares and her coach Gary West worked on a program called “Project Know Thy Enemy”. This involved racing against a male sprinter, Alex Bird, who was able to replicate the style of rival, Victoria Pendleton. At the Olympics, after the minor rounds we completed, Meares and Pendleton met in the final of the sprint for the best of three match up. Meares came out victorious in historical fashion thanks to the tactics developed with West and team in which British cyclist dubbed Queen Victoria was forced to race in a way in which she wasn’t comfortable with. The tactic involved Meares riding slow to the point of nearly being stationary so that Pendleton would have to hit the front where she was uncomfortable. Meares rode to the top of the track at its steepest point and balanced carefully. Once Pendleton wobbled, Meares waited for her moment to capitalise on to claim the gold medal. At the same Games Meares also took out the bronze medal in the team sprint event with Kaarle McCulloch.

After taking a year off, Meares took home a pair of silver medals at the 2014 World Championships held in Cali before heading to the Glasgow 2014 Commonwealth Games. She was the Australian Flag Bearer for the opening ceremony and took out gold in the 500m time trial and silver in the sprint race.

At the Rio 2016 Olympic Games, Meares’ last, she was the Australian Flag Bearer for the opening ceremony and served as the Australian team captain. Meares competed in the sprint, team sprint and the keirin where she won bronze. This podium finish made Meares the first Australian athlete from any sport to win an individual medal at four consecutive Olympic Games. Anna announced her retirement from elite cycling later that year.