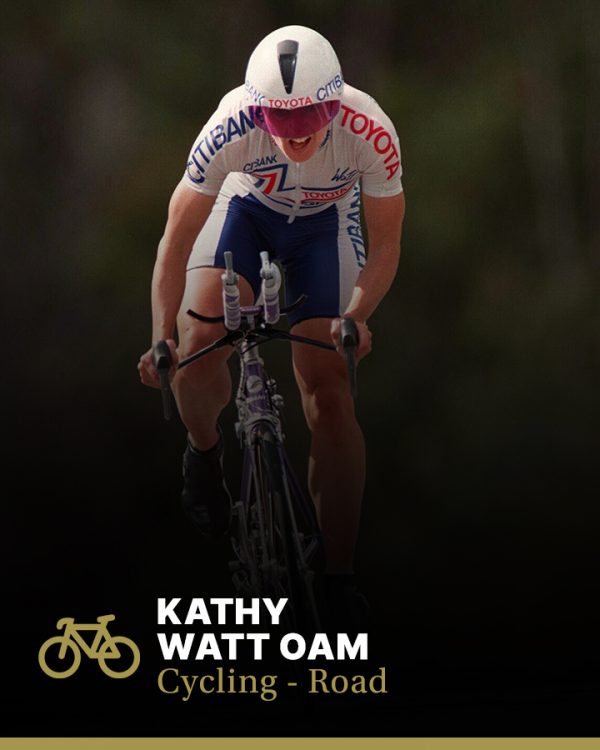 Kathy Watt OAM was inducted into the Sport Australia Hall of Fame as an Athlete Member in 2012 for her contribution to the sport of cycling.

Kathy Watt made history at the Barcelona Olympic Games in 1992 when she became the first Australian (male for female) to win an Olympic cycling road race, before she then added silver in the 3km pursuit.

While that victory was historic it was merely the highlight of a 20 year international career which encompassed two Olympic Games, six World Championship campaigns, and three Commonwealth Games.

Fittingly she book-ended her long international career with victories in the road race at the Oceania Games -at her inaugural appearance in 1987 and at her final appearance in 2007.

Kathy (b 1964) first came to prominence as a runner. Her father had been a marathon runner and initially she followed the same distance-running path, winning the national junior 3km title. An achilles injury caused her to train on a bike and for a time led to her competing in run/cycle duathalons, but eventually she settled on cycling as her strength.

After her 1987 Oceania Games success (in both road race the 3k pursuit) she went to the 1988 World Championships where she was seventh in the 3k pursuit but she hit the headlines at the 1990 Commonwealth Games in Auckland where she won Australia gold in the road race and silver in the 3km pursuit.

After her Olympic success at Barcelona she won triple gold for Australia at the 1994 Commonwealth Games in Canada with victories in the road race, the 3k pursuit and team time trial.

Controversy surrounded her next Olympic appearance, in Atlanta 1996, when she was replaced in the pursuit by Lucy Tyler Sharman. Watt appealed to the International Court of Arbitration which ordered her to be reinstated. She rode and finished eighth. She also finished fourth in the road time trial and ninth in the road race.

Always a strong-willed competitor, Watt also appealed against her non-selection for the 2000 Sydney Olympics. She was not successful in that appeal, and, after a retirement and comeback again failed to gain Olympic selection in 2004.

Her persistence was rewarded however with another comeback which produced success in Europe (Chrono Champenois, France, 2005 and Rotheux, Belgium 2006) leading to her selection in the 2006 Commonwealth Games team in her home town of Melbourne where she won silver in the time trial.