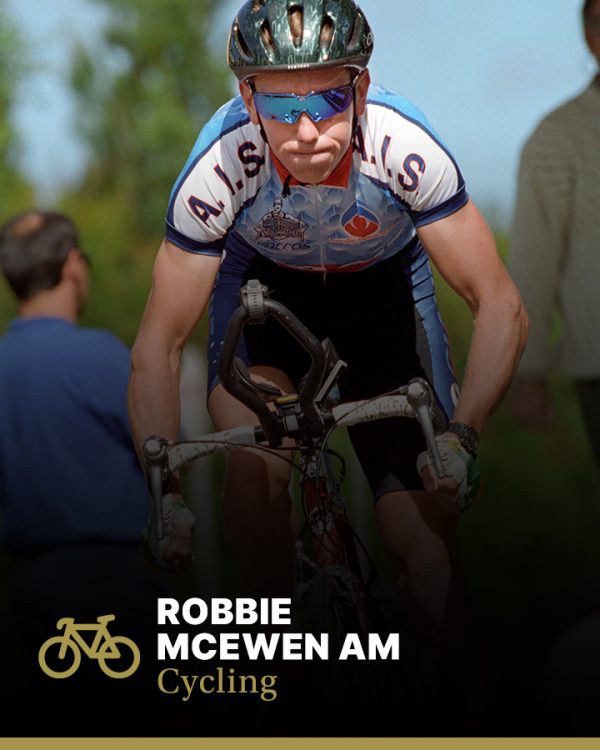 Robbie McEwen AM was inducted into the Sport Australia Hall of Fame as an Athlete Member for the sport of cycling on October 10 2019. At his peak he was regarded as the fastest road sprinter in the world.

McEwen’s cycling career began in BMX where he won two Australian titles before switching to road racing in 1990 at the age of 18. After four years moving from the regional to state and national levels of the sport, he joined the Australian Institute of Sport under renowned coach Heiko Salzwedel, where his sprinting prowess soon had him on the international stage.

Between 1996 and 2012, he rode for six professional teams -starting with the Dutch team Rabobank and finishing with the first and only Australian professional road race cycling team, GreenEDGE -and became a dominant presence at the two biggest three-week Grand Tours, the Tour de France and the Giro d’Italia.

With an aggressive, risk-taking, tactical style that did not necessarily rely on help from lead-out riders, the Queenslander won 12 stages of each. He claimed the Tour de France’s green jersey for the points classification -second in importance only to the yellow jersey for overall victory -three times, in 2002, 2004 and 2006, the first Australian to do so.

McEwen won 115 major professional races and more than 200 in all -at least one a year from 1996 to 2011 -including a record 5 victories in the Paris-Brussels one day classic, two Australian road championships and four national criterium titles.

He was also highly respected for his bravery and resilience, never more so than when he sustained knee and wrist injuries in a heavy crash 20km from the finish of the first stage of the 2007 Tour de France in Canterbury, England. With the help of his teammates he fought his way back to the peloton at 5km to go, worked his way through the entire field and won the sprint for the stage victory.

At the end of his last race, the Tour of California in 2012, the organisers presented him with a jersey for the most courageous rider as a symbol of not only his performance there but of his career.

McEwen was named Australian Cyclist of the Year in 2002 and was an inaugural inductee into the Cycling Australia Hall of Fame in 2015. In 2017 he was appointed a Member of the Order of Australia (AM) for significant service to cycling at the national and international level as a competitor, coach, and advisor, and to the community.