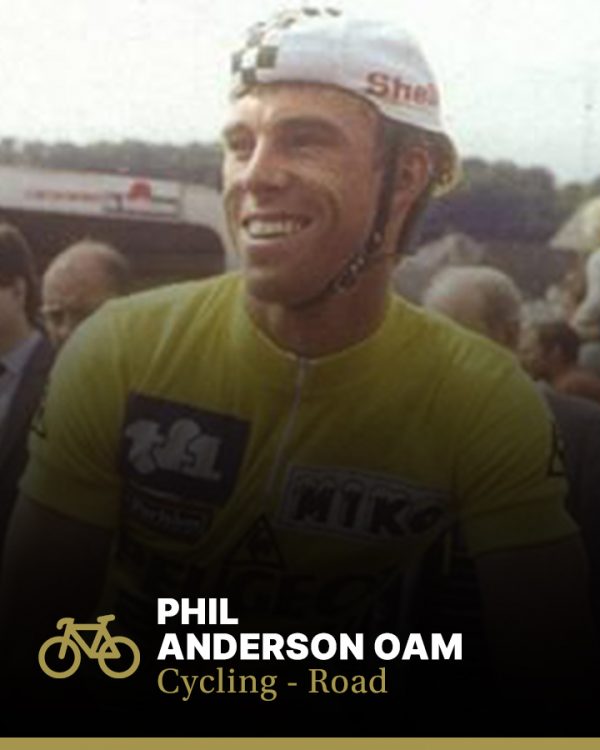 Phil Anderson became the first Australian to wear the yellow jersey as leader of the Tour De France – wearing it for a single stage in 1981, but returning the following year and holding it for nine remarkable days before finishing fifth.

At a time when Australian riders had little support on the European circuit, his competitive spirit allowed him to overcome illness and a succession of injuries to be a force in international cycling for 14 years. As a professional he was unable to ride in the Olympics, but he fittingly ended his career with a gold medal in the team time-trial at the 1994 Commonwealth Games.

Phil Anderson first came to the attention of the wider Australian public with his exciting win over Canada’s Pierre Harvey in the road race at the 1978 Commonwealth Games in Edmonton, Canada.

The following year he moved to France to ride with an amateur team, believing it would be good preparation for the 1980 Olympics. However, the form he showed in amateur ranks had him signed at season’s end by the professional Peugot team.

Turning professional robbed him of the chance for Olympic glory, but in 1981 he lined up for the Tour De France where on the mountainous sixth stage he fought an epic duel with five times tour winner Bernard Hinault and ended the day as the first Australian ever to wear the yellow jersey that marks the race leader.

He held it only for one day and was placed tenth at the finish, but he had proved to himself and the world that he was capable of matching it with the very best. The following year he held the jersey for nine days before finally finishing fifth.

He recorded top-ten finishes in each of the next three years and, despite lacking the support that some of his more famous European rivals enjoyed, established himself as one of the elite riders of the professional circuit before a rheumatic back complaint in 1987 interrupted his career. With typical determination he came back to reassert himself as a serious competitor, but there is little doubt that the injury took its toll.

Nonetheless, his record of 13 starts and 13 finishes in the Tour De France still places him among the top eight of all time for starts and finishes.

He retired in 1994. Fittingly his career closed with another Commonwealth Games Gold Medal, as a member of the victorious time trial team, again in Canada.

Although he was not the first Australian to rider in the Tour (12 others had preceded him) his sustained success on the European circuit provided inspiration for a host of other young riders who have followed him since and to whom he has often served as unofficial mentor.