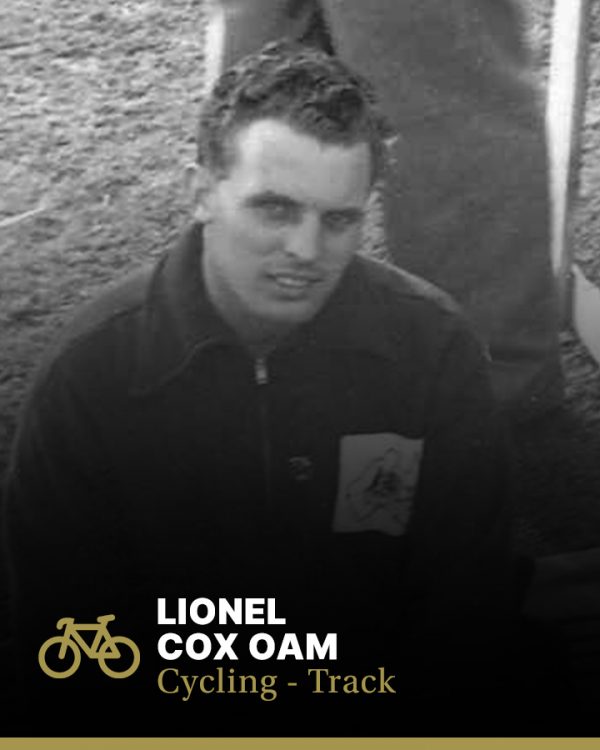 When Australia’s champion cyclist, Russell Mockridge, made a last minute appearance at the 1952 Helsinki Olympic Games, he found that his partner in the 2000m tandem event was Sydney’s unknown Lionel Cox, a cyclist who had never taken part in a tandem event in his life! Nevertheless, the pair combined as if they had ridden together for years and a week later cycled to a gold medal in the final.

Born in Brisbane, Queensland, but living in Sydney from the time he was 15, Cox, after having received his first bike when he was seven, always remained interested in cycling. He joined the Marrickville Cycling Club as a junior, but raced without any success and had so many falls that his mother insisted that he give the sport away until “he had some more sense”. She allowed him to resume again two years later, giving him a new racing cycle for his 17th birthday. She was a great support to her only child, acting as his timekeeper and helping to raise money to enable him to attend the Olympics. On his new bike, Cox won every race he contested as a junior, including the state junior sprint title. Working in the fruit markets to build up his body strength, he entered the senior ranks in 1948, winning the New South Wales sprint crown, finishing second in the Australian mile title and fourth in the sprint.

In December the following year, defeat by Mockridge in the national sprint title cost him the Empire Games selection and he rested during the 1950 road season to save himself for a big effort in the 1950/51 track season. His tactics paid off when he won both state and national mile titles, but was beaten into third place in the national sprint.

The following year he went through the NSW track season without a single defeat, beating Mockridge in the St. George Grand Prix. However, the Victorian turned the tables on him in the state mile test for the national titles in Adelaide. When the Olympic team for Helsinki was named, Cox was number six on the priority list for the cycling team and his chances of actually making the trip appeared to be almost nil.

However, victories in the sprint and mile and a dead heat in the time trial at the state championships convinced many experts that, with overseas experience, he could be a champion and the NSW Amateur Cyclists’ Union launched a fund to raise his expenses for the Helsinki trip: Cox’s workmates at the Sydney Fruit Market gave generously, the Victorian, NSW and Queensland Cycling Associations put in, and Cox and his mother made up more than half of the £800 required.

The partnership between Mockridge and Cox was one of the most remarkable in Australian sporting history. The two men, utterly different in background and personality, had never shared much experience before, and certainly none on a tandem. But on the morning after Mockridge’s arrival, Cox found himself in a storeroom under the Olympic village apartment, unpacking and then trying to put together the parts of a dismantled bicycle built for two.

Mockridge flew from London with the English team and the cycle manufacturers brought the bike out to the airport for them, but they said they had no use for it. Then it was offered to Mockridge who accepted the offer, not quite knowing what he was going to do with it. With the pieces finally in place, Mockridge proposed that they take a ride, and were suitably impressed with their form.

They decided to tackle the tandem, and then discussed two other track races, the sprint and the time trial. They were good but not close friends, and Cox always marveled at their different styles. Mockridge, bespectacled, and once a candidate for a church ministry; Cox’s background in the Sydney fruit markets had given him a more knockabout approach to life. They had no sectional manager with whom to swap opinions. Mockridge made the decision that he would ride the time trial, Cox would ride in the sprint, and they would tackle the tandem.

In the tandem, with Mockridge as steersman and Cox as tactician, the Australians improved with every ride through heats against the Hungarians, quarter-finals against the Danes, semi-finals against the Italians, and then the final against the South Africans. They had only one close call -against Denmark in the quarter final, mainly because of Mockridge’s defective eyesight. As they were making their final surge, he mistook a start line across the track for the finish, which was 40m further on, and momentarily relaxed. After some inventive words from Cox, they attacked vigorously, hitting the line and winning narrowly. Against the favoured South African pair in the final, the Australians bounded to the front at the gun, matched their opponents’ every move and kept them high on the track, forcing them to come home around the bankings. The tactics were successful and Mockridge and Cox took the gold medal by inches.

Cox had just finished a round of sprints before the tandem final. He went on to make the final of the event, recording 11.3 seconds, the fastest time of the entire series, in his semi-final win. But world champion, Sacchi from Italy and German champion, Potzerheim, wary of Cox’s superior speed, prevented him from using it in the final by taking the lead at the start and cycling slowly and warily to the back straight. On the final banking, Sacchi moved up abreast of the German, presenting Cox with the prospect of going three wide if he wanted to attack them. Sacchi held his position until the last possible moment, then flashed away. Cox tore after him at a terrific pace, overhauled the German, but could not make up the two length gap in the last straight, losing to Sacchi by a wheel. Mockridge also won gold in the time trial.

After the games, Cox raced with startling success on the European circuit and competed in the 1953 and 1955 world titles. He also represented Australia at the 1954 Vancouver Commonwealth Games before turning professional in 1956. However he applied for and was granted reinstatement as an amateur in 1958. He eventually returned home to ride in events around Australia before turning his attention to coaching.

In 1999, Cox was awarded the Medal of the Order of Australia (OAM) for his service to cycling as a coach and a competitor.