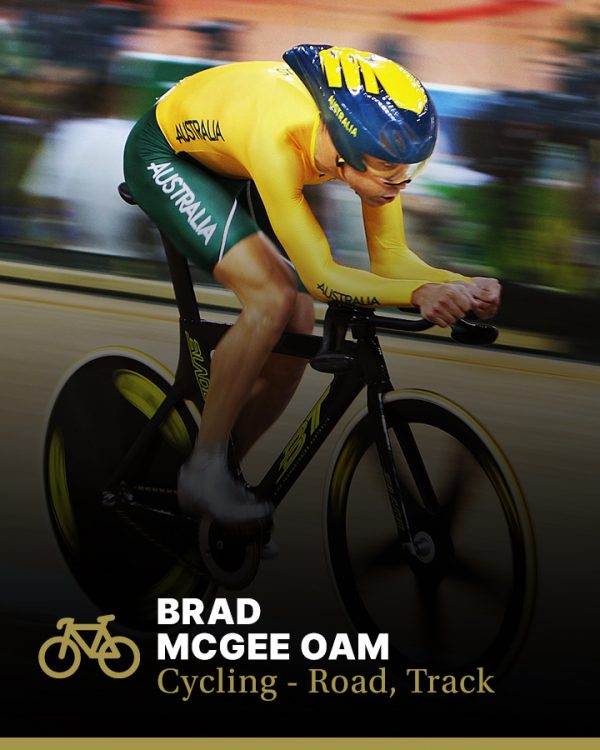 Brad McGee OAM was inducted into the Sport Australia Hall of Fame in 2017 as an Athlete Member for his contribution to the sport of cycling.

McGee achieved success both on the track and on the road making him one of the country’s best to ever race a bicycle. McGee was the first Australian to wear the leaders’ jersey in all three Grand Tour races; the Tour de France, Giro d’Italia and Vuelta a Espana and celebrated stage wins at both the Tour de France and Giro d’Italia. His track career included four Olympic Games from Atlanta 1996 to Beijing 2008, five Olympic medals including gold at the 2004 Athens Games as a member of the team pursuit, two world and five Commonwealth Games titles.

Growing up in Sydney, McGee started out in the sport as a strong pursuit racer after a significant growth spurt that came as a skinny 16-year-old, who was at the velodrome always competing with his three older brothers.

Improvement came quickly from there for McGee who became a world champion in the team pursuit before the age of 20 after setting the under 19 3000m world record. Only a year later he won a pair of bronze medals at his Olympic debut at the 1996 Olympic Games in Atlanta.

In 1997, he moved to France before setting national records over 4000m and for the hour, a successful season that included signing with professional team Française des Jeux in 1999.

McGee’s tenacity and mental strength was highlighted after winning a bronze medal at the Sydney Olympics in 2000, just 18 days after having a plate and seven screws inserted in a broken collarbone he injured during a training ride.

Two years later he had an extended run of form in three significant seasons winning the individual pursuit world crown and Stage 7 of the Tour de France before winning his fifth Commonwealth Games gold medal in 2002. The next year at Le Tour he won the prologue and wore the yellow jersey for the first three stages.

In 2004 McGee won gold in the team pursuit and silver in the individual pursuit at the 2004 Athens Olympic Games. Following that, he returned to the road where he placed eighth overall in the 20004 Giro d’Italia after winning the prologue.

McGee officially retired from cycling after the Herald Sun Tour at the end of 2008 as a 32-year-old that won an Olympic, two world championships and five Commonwealth Games gold medals. He had put his body through an incredible amount of stress along with a number of bad falls after nearly two decades of competing on the racing circuit.

He was awarded the Order of Australia Medal in 2005 and has been a member of the ‘Champions for Peace’ club, a group of 54 famous elite athletes committed to serving peace in the world through sport.