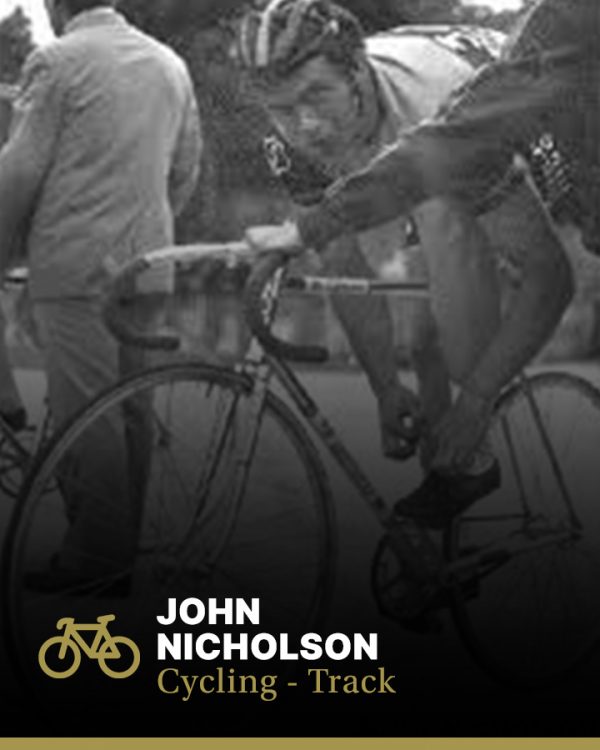 John Nicholson won the Australian amateur sprint title in 1970 and went on to win the world professional sprint titles twice, in 1975 and 1976.

Growing up in Melbourne, Nicholson rode a bicycle on a paper round and at 14 was encouraged to take up racing, winning his first race at the East Burwood cycle track. In 1965 he entered the Victorian track championships, and in 1966 at 17 won the Australian sprint and 500m time trial championships.

Nicholson was the youngest cyclist at the 1968 Mexico Olympics, but he competed at the 1970 Edinburgh British Commonwealth Games, winning gold in the 1000m match sprint, defeating Australian teammate Gordon Johnson in the final.

Nicholson then turned his attention to the 1972 Munich Olympic Games, winning silver in the 1000m sprint (scratch) race behind Frenchman Daniel Morelon, five times world champion and defending Olympic champion. After the Games, Nicholson beat Morelon, and in 1974 he defended his commonwealth title at the Christchurch British Commonwealth Games, and won silver in the 1000m time trial.

In 1975 Nicholson turned professional and became the third Australian ever to win the world professional sprint cycling championship and he defended it successfully the following year beating Italian Giordano Turrini 2-0 at Montzroni, Italy.

Nicholson lost the world title in 1977 when Japanese rider Koicha Nakano upset the field, but he managed to take third place. Later in 1977, while competing on the track at Coburg, Victoria, he fell and broke a hip. He recovered to ride in the world championships in 1978 and 1979, but was unable to regain his previous level of performance.