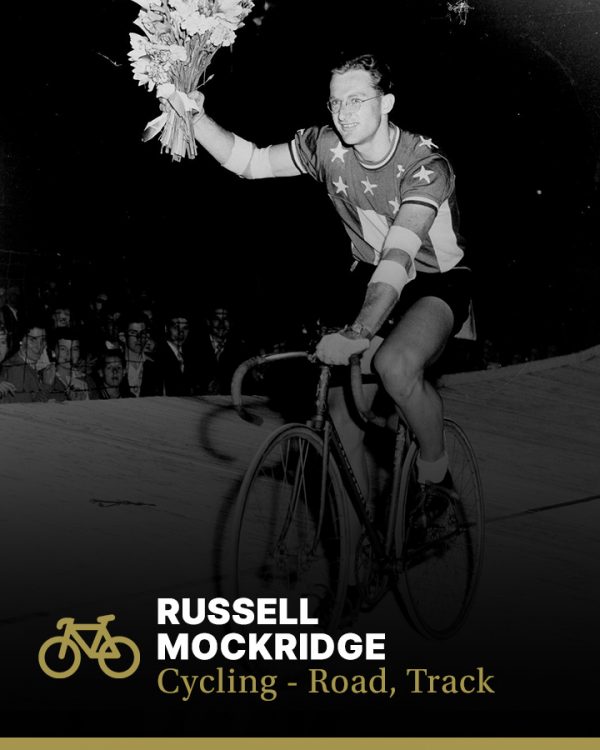 Russell Mockridge is considered to be one of Australia’s greatest ever cyclists. What separated him from other cyclists was his mastery of all disciplines of the sport and until recently, he was the only Australian cyclist to win two Olympic gold medals in a single Games (Ryan Bayley won two gold at the 2004 Athens Olympics).

Mockridge was lured into cycling mainly because his defective eyesight kept him out of cricket, football and ball games generally. When he turned up for his first race in Melbourne in 1946 he wore a sleek white jersey, a pink hat, a handkerchief in his school colours, with the stems of his spectacles held to his temples by white tape. That outfit earned him the distinctive nickname “Little Lord Fauntleroy”. Though unprepared and pedalling an old roadster, he won the event. He then progressed rapidly. A close third in the Melbourne to Castlemaine handicap on August 9 1947 earned him selection for the Victorian team in the Australian road championships. He won the 125 mile (201 km) road title on August 30 at Centennial Park, Sydney, and was selected to compete at the 1948 London Olympic Games.

At the London Games, Mockridge had the misfortune to have his tyre punctured twice in the 194.6km road race, pushing him back to 26th in a field of 101, and his team was eliminated in the quarter finals of the 4000m team pursuit. By the time of the 1950 Auckland British Empire Games, he was Australia’s premier cyclist, winning gold medals in the 1000m time trial and the 1000m sprint, and silver in the 4000m individual pursuit. After he returned home, he created a sensation by quitting the sport and his job to prepare for the Anglican ministry. Beset by doubts about his calling, he returned to the track within 14 months.

In 1951 Mockridge competed in the World Amateur Sprint Championship in Italy. He was beaten, but only after the two other finalists, both Italian, rode him off the track. A week later Mockridge easily defeated the winner, Enzia Sacchi, in a challenge match race.

In 1952, he became the first ever rider to win both the amateur and professional divisions of the Paris Grand Prix against an embarrassed world professional champion Reg Harris. The humiliation to the professionals resulted in the rules of the race being changed and amateurs being barred for many years. Mockridge’s place in the team for the 1952 Helsinki Olympics appeared certain until the Australian Olympic Federation required athletes to sign a £750 fidelity bond to remain amateur for two years after the Games. Keen to turn professional, he refused to sign. Bervin Purnell, the mayor of Geelong, eventually broke the impasse by guaranteeing the money if the AOF would reduce the amateur term to a year. In Helsinki, Mockridge became Australia’s first dual cycling gold medallist, winning the 1000m time trial and the 2000m tandem with Lionel Cox – they had never before riden together.

As a novice professional in Europe, Mockridge did not perform well. He abandoned track racing and made a modest living in kermesse (road) and critèrium (closed circuit road) races. In 1955 he teamed with fellow Australians Roger Arnold and Sid Patterson to win the Paris six-day event. Returning to Australia after an acclaimed solo ride in the Tour de France, he signed a contract with the promoter Ted Waterford. Over the next three years he became the most celebrated Australian cyclist of his generation, frequently winning from scratch in both track and road races.

Back in Australia in 1956 Mockridge dominated the road-racing season and set a new record for the Melbourne to Warrnambool classic, averaging a world record 44km/h. In 1957 Mockridge was unbeatable and won the Australian road title for the second straight year and such major events as the Tour of Victoria, Tour of Tasmania, Tour of Gippsland, and the Midlands Tour.

On September 13 1958, shortly after the start of the Tour of Gippsland, Mockridge was struck by a bus and killed on the Princes Highway at Clayton, Melbourne. Mockridge had seemed set for a triumphant return to Europe. Early jibes that he was too delicate for robust competition had been silenced. Already an international star, he died with great potential unfulfilled.