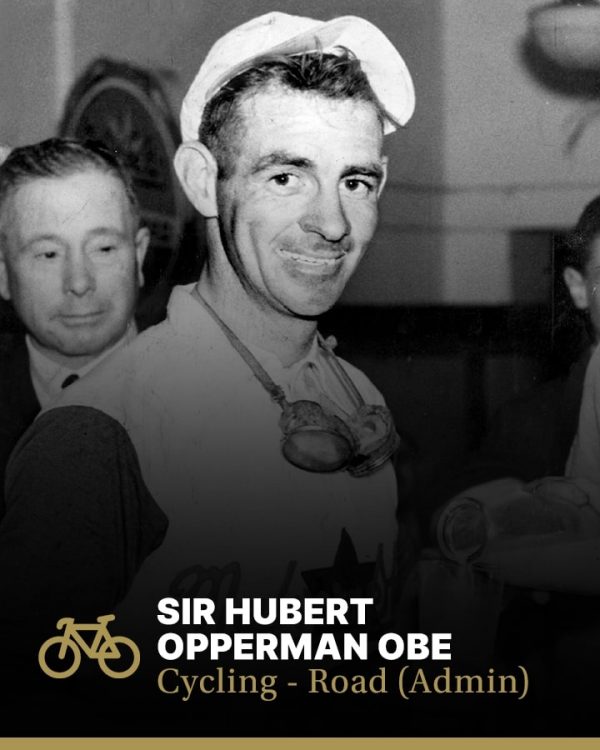 Sir Hubert Opperman was Inducted into The Sport Australia Hall of Fame in 1985 as an Athlete Member for his contribution to the sport of cycling and was Elevated to “Legend of Australian Sport” in 1993.

Opperman, affectionately referred to as Oppy by Australian and French crowds, earned international acclaim for his endurance cycling feats in the 1920s and 1930s. His feats of stamina and endurance in cycling earned Opperman the status of one of the greatest Australian sportsmen.
Opperman rode from the age of eight as a Post Office messenger, delivering telegrams by bicycle. He rode until his wife Mavys, fearing for his health and safety, forced him to stop riding in 1994 on his 90th birthday.

In 1921 at the age of 17 he came third in a cycling race, the prize was a racing bike by Malvern Star Cycles, a tiny cycle shop in the Melbourne suburb of Malvern. The proprietor of the shop, Bruce Small, was so impressed with the performance he gave the young Opperman a job.

Opperman went on to an illustrious cycling career. His seemingly endless stamina and thirst for fitness reaped early rewards when, at 20 years of age in 1924, he was the Australian road cycling champion. He retained the title in 1926, 1927, and 1929 and created many world records ranging from 849 miles to 1000 miles.

In 1928 he won the prestigious Bol d’Or 24 hour classic at a 500m velodrome in Paris. The feat of winning this race is even more astounding. Both his racing bikes had been sabotaged by the chains being filed down so that they soon failed. His manager had to find a replacement bike quickly, and it ended up being the bicycle of his interpreter with heavy mudguards and wheels and upturned handlebars. Effectively he was out of the race for about an hour. But Opperman was determined and rode the old bike for 17 hours without dismounting. He won the race by 30 minutes to the cheers of 50,000 French citizens yelling “allez Oppy”. He received a hero’s welcome when he returned to Melbourne later that year.

He was voted Europe’s most popular sportsman in 1928 by more than 500,000 readers of the French sporting journal L’Auto, ahead of their own national tennis champion Henri Cochet.

In the famous Warrnambool to Melbourne Classic, he won the Blue Riband for the fastest time three times. In the prestigious Goulburn to Sydney Classic he twice won from scratch, and was three times the fastest rider.

In 1931 Hubert Opperman became the world’s greatest endurance cyclist when he won the 1931 non stop Paris-Brest-Paris tour (726 miles/1162km) breaking all previous records over the distance in the time of 49 hours 23 minutes. After this win he was idolised in the French press and by the French public.

His participation and captaincy of the Australian teams in the Tour de France in 1928 and 1931 sets an example to more recent Australian riders to follow in his path such as Phil Anderson, Stuart O’Grady, Robbie McEwen, Baden Cooke, and Cadel Evans.

His cycling career came to an end with World War II when he joined the Royal Australian Air Force and rose to the level of Flight Lieutenant.

After the war Opperman joined the Liberal Party of Australia and in 1949 was elected to the Parliament of Australia for the Victorian electorate of Corio, Geelong. He served in parliament for 17 years under Prime Ministers Sir Robert Menzies and Harold Holt. After his retirement from politics in 1967 he was appointed as Australia’s first High Commissioner to Malta, which he performed for five years.

Opperman became an Officer of the Order of the British Empire (OBE) in 1952 and was knighted in 1968. In 1991 he attended the centenary celebrations of the Paris-Brest-Paris race and received the Gold Medal of the City of Paris.