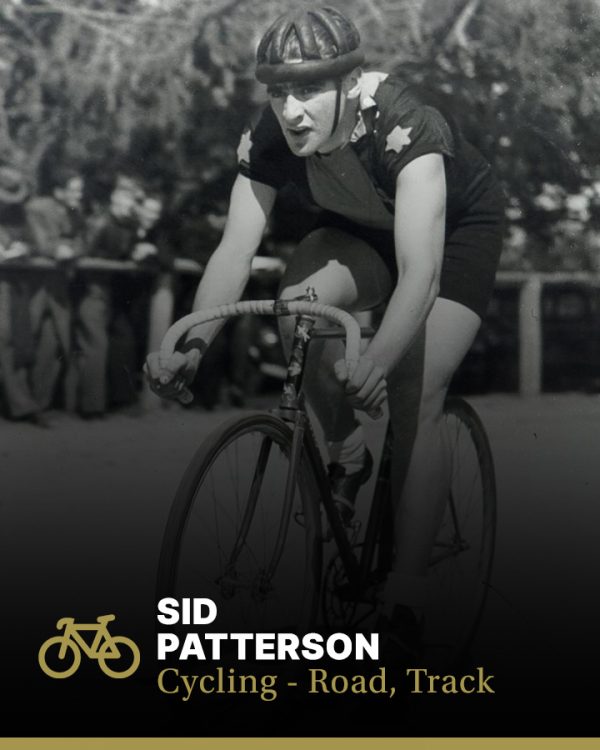 In the late 1940s, Australia was searching for heroes. Don Bradman had retired from cricket and Hubert Opperman had retired from cycling. Opperman’s departure left a huge gap into which stepped two of Australia’s greatest cyclists. Russell Mockridge, probably Australia’s finest all round cyclist and Sid Patterson, a champion of the track. The two started as keen rivals in amateur track races and no doubt spurred each other on to greater performances. Later they pursued separate careers, Mockridge, first as an amateur track rider then as a professional road racer, Patterson as a professional track rider.

Patterson started racing when he was 13 years of age and won his first event, a 25 mile road race, one year later. In the same year he had his first track success, a win in an open handicap. While a teenager, Patterson won every Victorian and Australian title between the distances of 1000m and ten miles.

He was just beginning to mature when the team was chosen to compete in the 1948 London Olympics. Patterson went as a sprint reserve and to ride in the time trial and the 4000m team pursuit. He finished sixth in the 1000m time trial in a time of 1 min 15.7sec. He was in the Australian team that went out to Uruguay in the quarter finals of the 4000m team pursuit in a time of 5:07.7.

After the Olympics, he went to the World Championships in Amsterdam. He was eliminated by Alan Bannister in the eighth-finals of the sprint and went out to J. Dupont, the French Olympic kilometer champion, in the quarter finals of the 4000m pursuit.

After the championships in Amsterdam he returned to England and, partnered by his countryman, Russell Mockridge, won several Madison races. It was this type of racing that won for Patterson his popularity with the track racing crowds. Under hard sprinting conditions, Patterson was supreme. In one race he won every sprint, no one being able to match the strength and speed shown by the Australian.

In 1949 he won every Australian track championship in the sprint, time trial, 1 mile, and 5 mile events. He also broke the Australian 1000m unpaced standing start time trial record with a ride of 1:13.24.

Later that year he won the world amateur sprint championship in Copenhagen. In his races for the world title, Patterson was the victor over Kasslin, Finland, and Welt, Austria, in his heat; Rants of Denmark in the eighth-final; Verdeun of France in the quarter-final; Lognay, the Grand Prix of Paris winner, in the semi-final; and Bellenger, champion of France in the finals. From the eighth-finals all races were decided over the best of three matches, but Patterson needed only two in each case.

Patterson was able to travel so extensively due to a band of enthusiasts in Australia who had faith in his ability to win a world title. Patterson was not sent by the Australian Amateur Cycling Association, but by a subscription fund organised by Leo Keating, Nick Grey and Hubert Opperman, who formed a committee to raise the necessary funds to send Patterson to the Championships. The required amount of money was raised by running a meeting at the Melbourne Board Track for this purpose, while another gift of £25 was given to him from the Victorian Amateur Cyclists’ Union just as he was leaving.

In 1950 he won the world amateur pursuit championship in Liege. At the 1950 Auckland British Empire Games he won silver medals for the 1000m sprint and 1000m time trial events.

In 1951 Patterson became a professional cyclist and won the world professional pursuit championships in 1952 in Paris, and in 1953 in Zurich. Patterson teamed with Russell Mockridge and Roger Arnold to win the Paris 6-day race in 1955, defeating the French favourites.

Patterson continued cycling in the 1960s where he won numerous events, including the Victorian professional title in 1964 for the seventh time, the Australian title in 1967 for the twelvth time, and the 6-day event in Launceston.

Patterson was sponsored by ‘Malvern Star’, founded by Sir Bruce Small. In doing so, he inherited and carried with honor the mantel of Hubert Opperman. Malvern Star’s publicity material in the 1950s featured his successes prominently.

He was Athlete of the Year in 1949 and retired from competitive cycling in 1968. The ‘Sid Patterson Grand Prix’ is held in Melbourne annually in his honour.