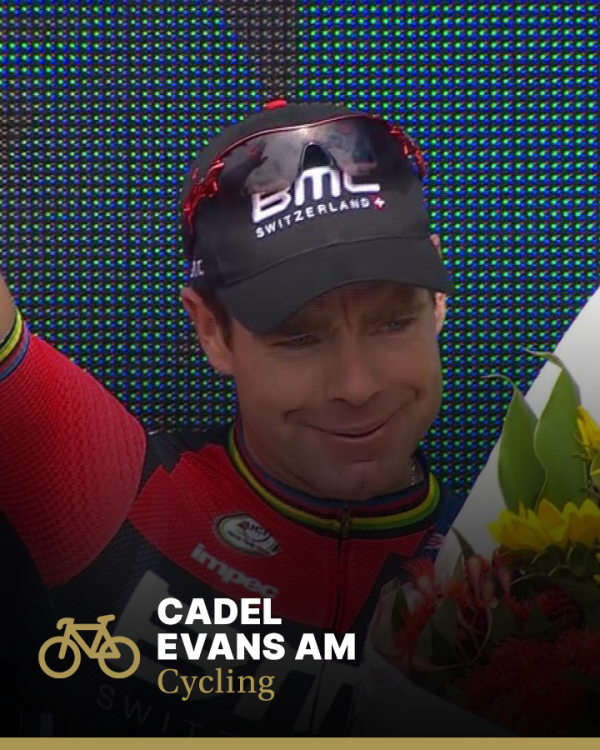 Cadel Evans AM was inducted into the Sport Australia Hall of Fame on Friday, December 4, 2020 as an Athlete Member for his contribution to the sport of cycling.

Cadel Evans cemented his place as one of the all-time greats of Australian road cycling following his historic 2011 Tour de France win. In doing so, Cadel became the first Australian to conquer one of the world’s biggest races after two previous second place finishes, among his many appearances in the Tour. Cadel’s success wasn’t limited to the Tour de France but across all three Grand Tours, where he won stages, wore the leader’s jersey and finished the tour on the podium. He became one of the few cyclists to finish on the podium at all three Grand Tours and to win a World Championship, winning the 2009 UCI Road World Championship.

Evans’ many achievements as a road racer were capped in 2011 when he became the first Australian and the oldest post Second World War to win the Tour de France, the biggest annual sports event in the world and one of the most physically challenging. Some prominent media observers have described it as the pre-eminent individual feat by any Australian sportsperson for many years, if not ever.

Evans started out as a mountain biker, going on to win numerous titles as a young adult including the World Cup in 1998 and 1999 and placing seventh at the Sydney 2000 Olympic Games for Mountain Bike Cross Country. By then he had already foreshadowed a professional change of discipline to road racing by winning the 1999 Tour of Tasmania with a hugely impressive mountain stage win, which prompted commentary doyen Phil Liggett to famously declare that he had just seen a future winner of the Tour de France.

In 2001, Evans made the switch to professional road racing, with early successes including overall wins in the 2001 and 2004 editions of the Tour of Austria and the Manchester 2002 Commonwealth Games time trial as well as a day in the leader’s pink jersey at the Giro d’Italia, where he finished a creditable 14th at his first Grand Tour event.

After being forced to abort his first two planned attempts at the Tour de France in 2003 and 2004 because of injury, he finished eighth on debut in 2005, riding for Belgium team Davitamon-Lotto, the first Australian in the top 10 since Phil Anderson in the eighties. In the ensuing years he finished fourth, second, second and 30th.

In 2010 Cadel made the switch to team BMC where he finished 26th, the historical triumph in 2011, followed by another top finish, seventh, and finally, 39th, making him far and away the most successful Australian rider the great race had seen. Cadel earned much applause for his courageous ability to ride through the pain barrier after the crashes that are an inevitable part of life for all road cyclists.

Evans also became the first Australian winner of the road race World Championship in 2009, shortly after finishing third in the Vuelta a Espagna. Cadel finished in the top 10, 11 times, won stages and wore the leader’s jersey in all three of the Grand Tours. He is one of only four riders in the history of cycling to podium at all 3 Grand Tours and win the UCI Road World Championships. Cadel’s other big wins included the prestigious Le Fleche Wallone One-day Classic in 2010, the Giro del Trentino in 2014 and the Criterium International in 2012.

Evans announced his retirement in 2014 and signed off by competing in the inaugural Cadel Evans Great Ocean Road Race the following year, an event held near his Australian base near Geelong and which was later elevated to UCI World Tour status, reinforcing his standing in the cycling world. He is the only rider in history to have been the world’s number one ranked mountain bike rider and number one ranked road cyclist in a career that spanned 21 years.

He has been widely applauded for work with charities, minority groups and the community.
Cadel was made a Member of the Order of Australia on June 10, 2013 for significant service to cycling, and to the community.