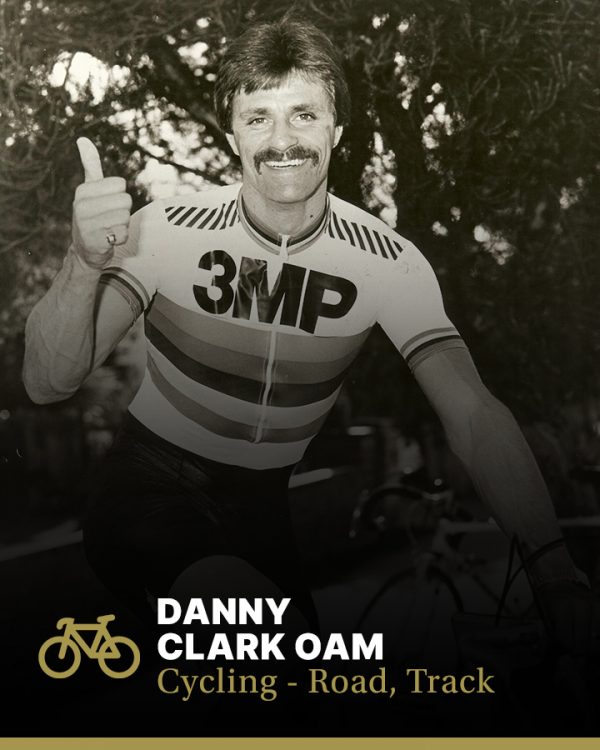 Danny Clark OAM was inducted into the Sport Australia Hall of Fame in 1987 as an Athlete Member for his contribution to the sport of cycling.

In more than a century since six-day bicycle racing was introduced to Australia on Melbourne’s Exhibition circuit in 1881, Australia has produced some road racing masters. As a winner of 74 six-day races (out of 235 attempts – the second highest total in the history of the sport) and four world titles during his career, Danny Clark ranks with the greatest of them and is regarded as one of the world’s finest six-day race riders.

Clark was just 17 when he won Commonwealth Games silver in the 4000m individual pursuit at the 1970 Edinburgh Games and two years later, at the Munich Olympics, he won silver in the 1000m time trial – beaten by just 0.43 seconds in the final by the Danish world champion Neils Fredborg, despite fracturing a finger in training.

He was crowned Australian Champion 32 times during his career and between 1968 – 1973, won 13 individual National Track Championships. In 1973 he won each of the four individual titles he contested – the 1000m time trial, the 1000m sprint, and the 16km and 4000m pursuits, which had never been achieved before. Then, later in 1973, turned professional, and distinguished himself on the European and Australian circuits.

Clark won four world professional championships; the Kieren Sprint in 1980 and 1981, and motor-paced events in 1988 and 1991 where, at the age of 39 years and 21 days, he became the oldest cycling world champion in the history. He also won five silver (two Kieren, two motor-paced, one point-score) and two bronze medals (motor-paced and point-score).

In Europe in 1987, he won a record nine of the 11 major six-day races and demonstrated his tremendous all-round ability, winning the International Omnium Classic – a major European event – and became the first rider ever to win all four sections of the event: the individual pursuit, flying kilometre, elimination, and point-score races. The next year, he added two more European titles to his collection and became the only rider to win five consecutive six-day track events.

Such was their success, Clark and riding partner, Tony Doyle (UK), were barred from riding together after the pair won a record 19 events – a cycling partnership record.

In mid 2004, Clarke was struck by a car while training in Queensland where he suffered a smashed wrist. His training was impacted from that point onwards.