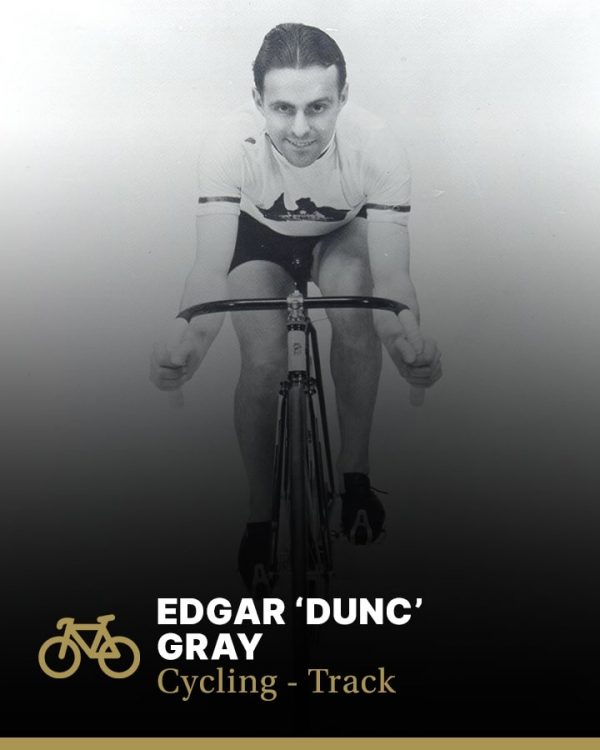 Dunc Gray was Inducted into The Sport Australia Hall of Fame in 1985 as an Athlete Member for his contribution to the sport of cycling and was Elevated to “Legend of Australian Sport” in 1995.

Gray grew up near Goulburn, New South Wales, and learnt to ride at an early age, becoming Australia’s first Olympic cycling champion.
After joining the Goulburn Amateur Bicycle Club, Gray went on to become Australia’s dominant cyclist, winning 20 national titles from 1000m to 10 miles, 25 NSW state titles, and 36 club championships between 1925 and 1943. On eight occasions he was the NSW 1000m time trial and/or the 1000m sprint winner.

Although Gray had no coach and limited international experience he won Australia’s first ever Olympic Games cycling medal at the 1928 Amsterdam Olympic Games, bronze in the 1000m time trial. He had never ridden in a time trial before the Games but was selected for the team because he had won the Australian one-mile championship, and was allocated the time trial because another rider was preferred for the sprint.

Despite suffering from illness when the 1932 Los Angeles Olympics began, Gray won Australia’s first ever Olympic cycling gold medal, in the 1000m time trial, in a world record time of 1 min 13 seconds. Gray was the only cyclist chosen in Australia’s 12-person team for Los Angeles, and was entered for both the sprint and the time trial. A week before he was due to ride he was admitted to hospital with influenza, but still reached the semi-final of the sprint. He qualified to ride off for the bronze medal, on the same night as he was due to tackle the time trial. Concerned that he didn’t have the strength for two hard rides in a short space of time, he chose to withdraw from the medal race… and later watched as his Italian rival rode the course alone.

Gray became Australia’s first Empire Games cycling champion when he won the 1000m time trial at the 1934 British Empire Games. Two years later at the 1936 Berlin Olympic Games where Australia won no gold, Gray reached the quarter-finals of his only event, the sprint. But, as the team’s only previous gold medallist, he had the honour of carrying the Australian flag in the Opening Ceremony. He was again the flag bearer at the 1938 Sydney Empire Games where he won gold in the 1000m sprint. Gray was awarded the coveted Helms Award as the outstanding Australian athlete in 1932.