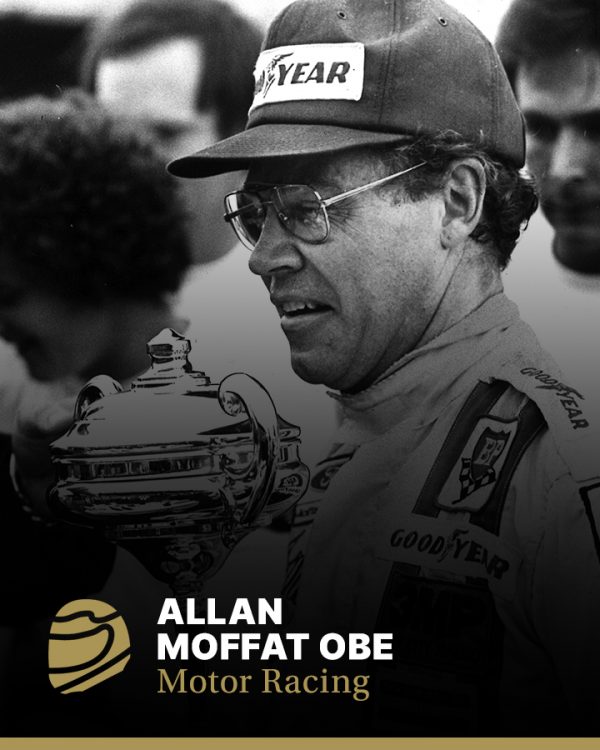 Allan Moffat was OBE was inducted into the Sport Australia Hall of Fame in 2018 as an Athlete Member for his contribution to the sport of motor racing.

Moffat was an icon of Australian touring car racing during one of its most competitive eras, the 1970s and 1980s, he won 32 of his 100 starts between 1965 and 1989. He claimed the championship four times and two of the biggest races, Bathurst and Sandown, four times and six times respectively. He and his friend and arch rival Peter Brock are the only drivers to have won Bathurst in both its 500 mile and 1000 kilometre formats. Moffat’s impact went well beyond the winner’s podium. He brought a new level of business professionalism to motor racing, pioneering the use of sponsorship in a way that would change the sport forever.

Born in Canada, Moffat moved to Australia at age 17 with his family and started motor racing in the early 1960s, finishing fourth in the inaugural 1964 Sandown six-hour enduro in Melbourne with co-driver Jon Leighton finishing in a Ford Lotus Cortina. After gaining experience in America, he returned to Australia full-time in 1969 and became a regular in the touring car championship, driving a Ford Mustang -“the definitive race car of my life” — in which he won 101 championship and non-championship races from 151 starts between 1969 and 1972.

Moffat twice held the record for most touring car championship round wins, firstly 25 and then with 32, both benchmarks eventually being overtaken by Peter Brock during their epic rivalry.

He retired from racing in 1989, bowing out with a win in his last race, the Fuji 500 in Japan, partnered by German driver Klaus Niedzwiedz. He continued to be heavily involved as a team owner, manager and administrator and was inducted into the V8 Supercars Hall of Fame in 1999 and the Australian Motor Sport Hall of Fame as an inaugural member in 2016.