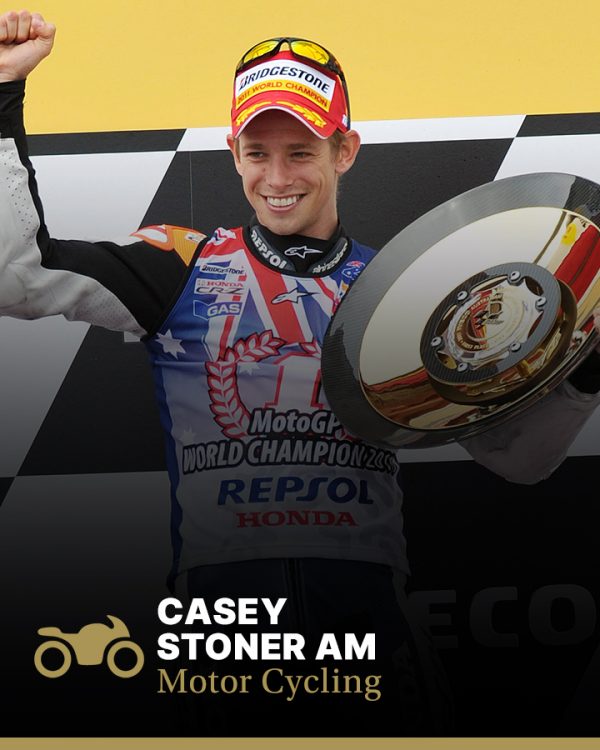 Casey Stoner AM was inducted into the Sport Australia Hall of Fame in 2015 as an Athlete Member for his contribution to the sport of motorcycle racing.

The boyish-looking, jockey-sized Queenslander competed in his first race when he was four years old, moved into the sport full-time at 14 and went on to win two MotoGP world championships, in 2007 and 2011, before retiring in 2012 at 27, still at the top of his game. He was also runner-up to Italian arch rival Valentino Rossi in 2008 with 280 points, at the time, the highest tally recorded to not win the title, and placed fourth in 2008 and 2010.

A crowd-pleasing daredevil who could ride any motorbike beyond its limits, Stoner came through the 125cc and 250cc classes, winning seven races, before moving into the elite MotoGP class with Honda in 2006. He switched to Ducati in 2007 and back to Honda four years later, giving each manufacturer a world title.

His 115 MotoGP races yielded 38 wins, 69 podiums, 39 poles, 29 fastest laps and 1815 points. Statistically the only Australian rider who had his measure was legendary predecessor Mick Doohan, who won five world titles. Only two Italian riders, Rossi and Giacomo Agostini, along with Doohan had won more races when he bowed out. Many believe Stoner to be the fastest and most talented rider of them all.

He battled injury and illness at various stages which might have contributed to his decision to retire when he did, saying he had lost some of the enjoyment of racing. It was premature exit in the eyes of most fans.

Stoner won everywhere that Grand Prix events were held during his time on the circuit but he was King of his own home track, Phillip Island in Victoria, never losing there on a factory bike. Record crowds gathered to watch him win six years in a row, including his valedictory race in 2012 in which he triumphed by a massive 10 seconds.

After winning the 2007 world title, he was named the 2008 Young Australian of the Year and in 2013 was awarded the Order of Australia for services to the sport and was officially Inducted into the MotoGP Hall of Fame as the 20th MotoGP Legend.