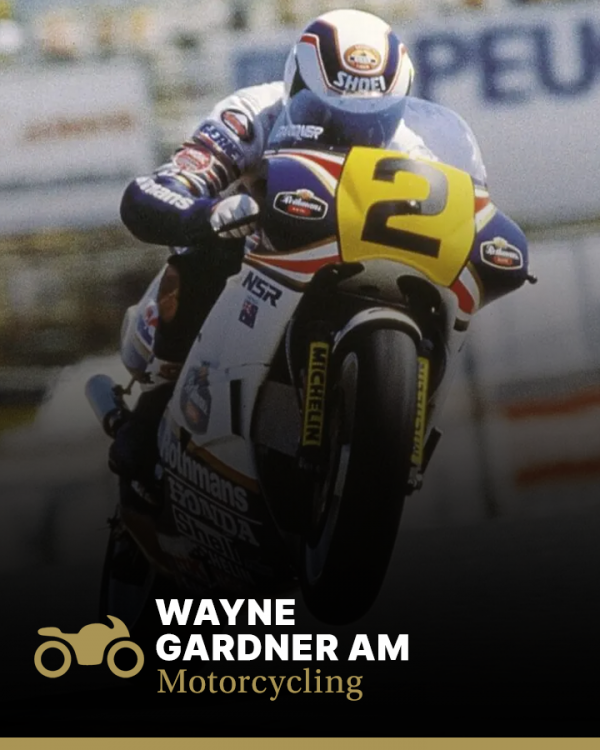 Wayne Gardner AM was inducted into the Sport Australia Hall of Fame in 1991 as an Athlete Member for his contribution to the sport of motorcycling.

Gardner developed an early passion for motorbikes, competing in his first race on a well loved mini bike in 1972. After leaving school, Gardner became an apprentice fitter and turner although this profession was soon discarded in order to pursue his dream.

Gardner began his racing career in 1977 at age 17, riding a second-hand 250cc Yamaha bike in the Australian championship, finishing second on debut at Amaroo Park (Sydney). He went on to record his first win a few weeks later at Oran Park Raceway (Sydney). He immediately stepped up to 350cc and continued the season with his ‘win or crash trying’ attitude.

This level of aggression shocked the establishment and the Auto Cycle Union considered banning him. Luckily on the deciding committee was his new sponsor Karl Praml, a Woollongong motorcycle dealer. Karl threatened that if Gardner didn’t finish every race then his sponsorship would be withdrawn, thus encouraging him to learn the race craft to win championships rather than just individual races during 1978.

1979 saw Gardner promoted to A-Grade winning on both 350cc and 750cc machines. 1980 saw him ride away from the field at a rainy Sandown in Victoria. His Japanese engineer and team owner, Mamoru Moriwaki, had been looking for a rider of sufficient talent to run overseas.

In 1981 Gardner finished fourth in the Superbike at Daytona Speedway in the United States before winning his first race on arrival in England. Within weeks he was at Donington, racing against his heroes Kenny Roberts, Randy Mamola and Barry Sheene. He crashed in May, fracturing his ankle, which looked like putting him out of his first Japanese race at Suzuka. Unperturbed he simply removed the plaster and won the event!

For 1982, Gardner signed up with the powerful Honda team, winning several races and entering his first 500cc world championship event. Things didn’t go according to plan and was shaken when the reigning world champion, Franco Uncini, fell in front of him. The resulting crash put Franco into a coma for a whole week. Fortunately Franco recovered as Gardner was prepared to end his career there and then if Franco had died.

In 1984 Honda was more concerned about racing in Britain rather than European GPs so Gardner had to risk his own money to subsidise his campaign there. Good results meant that the prize money almost covered the expenses. He established a reputation in Europe and won the British 500cc championship.

His results meant that Suzuki started to court him and in response Honda gave him the chance of chasing the world championship in 1985. He soon realised that the three cylinder machine he had been given was no match for the V4s of his competitors so he had to settle for driving the bike beyond its natural capabilities to make an impression.

His efforts were enough for Honda to finally give him fully competitive equipment in 1986 and won in his first race on the bike, becoming the first Australian to win a 500cc GP race in nine years. Other wins followed and Gardner finished the championship in second place. In 1987 everything came together and he won the 500cc world championship, becoming the first Australian ever to do so.

A highlight of Gardner’s career was his win at the inaugural Australian Motorcycle Grand Prix at Phillip Island in 1989. This race captured the hearts of the nation as the titanic battle between four of the worlds top riders resulted in a thrilling victory for one of Australia’s favourite sons. Against almost impossible odds, he repeated this victory in 1990, riding with a broken wrist bone as well as a broken fairing which had worked lose.

He had also acquired a new teammate – fellow Aussie Mick Doohan. Inspired by what Gardner had achieved, Doohan went on to become world champion five times.

Gardner announced his retirement from Grand Prix racing in 1992, ending his illustrious career with a win in the 1992 British Grand Prix. His career record includes 18 Grand Prix wins and an unequaled four victories in the Suzuka 8 hour Endurance Event in 1985, 1986, 1991 and 1992. Gardner stayed closely involved with the sport, helping various riders like Daryl Beattie early in their careers.

Following his retirement from the 500cc championship, Gardner turned his interests to four-wheeled motorsport. He began his V8 Supercar career in 1993, winning the race at the Australian Grand Prix weekend and finishing third in the prestigious Bathurst 1000, driving a Holden Commodore. In 1994 he formed his own team, Wayne Gardner Racing, and continued racing V8 Supercars until 2000, the year in which he won pole position for the Bathurst 1000 however failed to finish the race. Many crashes and accidents while driving the HRT Commodore led to him being nicknamed Captain Chaos.

Gardner also made a foray into the All Japan Grand Touring Car Championship in 1996 and raced in this competition until his retirement from motorsport in 2001. He won a round of the championship in 1999 (at Fuji International Speedway) and 2001 (at SportsLand Sugo). He also had the distinction in 2001 of being the only Toyota driver to finish every race that season, and also finish every race in the points.

In 1998 Gardner made a one-off appearance at the 24 Hours of Le Mans. He was entered in the Riley & Scott with Philippe Gache and fellow ex-rider Didier de Radigues. They qualified 26th but failed to finish due to engine problems after competing 155 laps.