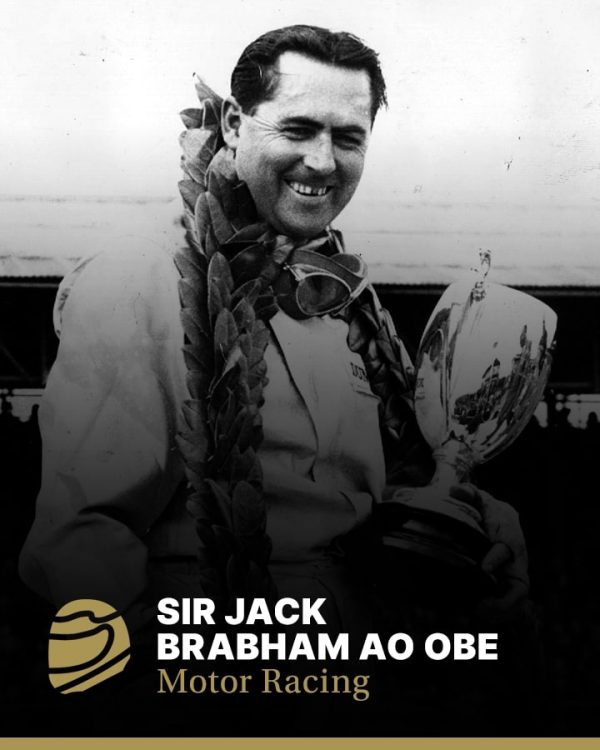 Jack Brabham was Inducted into The Sport Australia Hall of Fame in 1985 as an Athlete Member for his contribution to the sport of motor racing and was Elevated to “Legend of Australian Sport” in 2003.

The Brabham name is synonymous with Grand Prix motor racing and to this day, Sir Jack Brabham, the first driver in history to be knighted for his services to motor sport, remains one of racing’s most popular personalities.

The triple world champion is the only Formula One driver to have won a world title in a car of his own construction – the BT19 – which he drove to victory in 1966. The following year the Brabham team won its second successive World Championship when New Zealander Denny Hulme drove the BT20 to victory.

During World War II he served in the air force, and in 1946 opened a small repair business. He also raced midget cars and in his first season won the New South Wales championship. He established himself in Australian oval racing before switching to road racing in the early 1950s. His driving style matured dramatically at this time and in 1955 he moved from Australia to Europe to drive for Charles and John Cooper. That partnership resulted in Brabham’s first two championship titles in 1959 and 1960. It was also in a Cooper that Brabham shook the establishment at Indianapolis, qualifying the first modern mid-engined car at the 500 and finishing ninth. What seemed an anomaly at the time would in fact lead to a revolution at the Brickyard and the demise of the classic Indy roadsters.

In 1962, Brabham teamed up with fellow Australian Ron Tauranac, now of Ralt Racing fame, to produce the first of the Brabham Marque, the Brabham BT-3. This particular car debuted in the 1962 German Grand Prix and became the first of many successful Brabham cars that have run in Formula One. Brabham also introduced Honda to four-wheeled motor sport, their engines powering the successful Brabham Formula Two chassis in 1966.

Brabham scored his final Grand Prix win in South Africa in 1970 before calling his gallant motor racing career to an end at 44 years of age. He has never lost contact with the motor racing world and still competes in many different celebrity events.

In 126 Grand Prix starts from 1955 to 1970 Brabham had 14 wins (ten seconds, seven thirds), and 13 pole positions. He won both the Australian and New Zealand Grand Prix three times and was four time winner of the European Formula Two championship.

He was named Australian of the Year in 1966, was awarded the Officer of the British Empire (OBE) in 1966, and was knighted for his services to motor sport in 1978. He was inducted into the International Motorsports Hall of Fame in 1990.