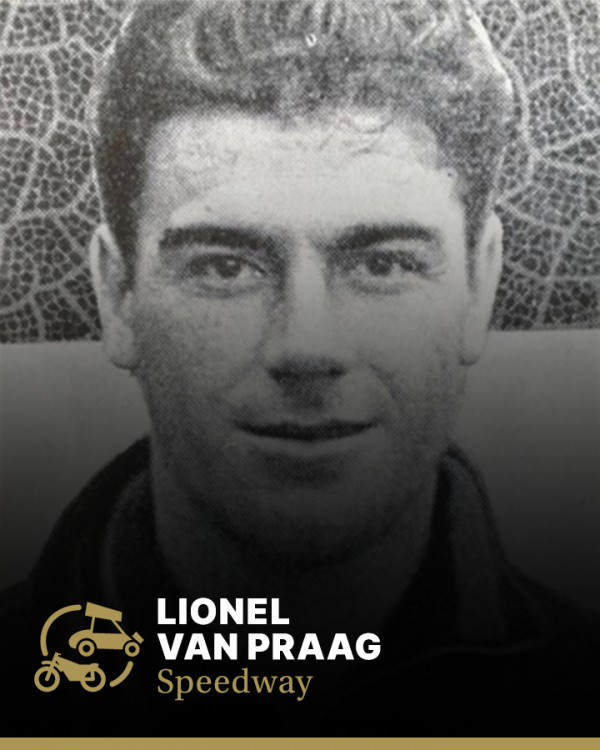 Van Praag began racing motorcycles when he was 15 and after a number of novice races at the old Olympia Speedway, at Maroubra, concentrated on the booming Sydney Showground dirt track. A natural rider, he almost instantly became a senior competitor and after rejecting years of offers to race in England, finally joined the Wembley team in 1931.

Van Praag was an Australian Test team regular until the outbreak of the Second World War. He won the first ever official World Championship on December 10, 1936, and was placed seventh in the 1937 event, and fourth in the 1938 championship. The 1939 final was cancelled because of the outbreak of War but Lionel was at the time sharing third place on points with three other riders.

The first championship was a strange event, riders carried into the meeting a score of bonus points amassed in the qualifying rounds. It was possible that the rider who scored best of the night would still not be world champion because of his qualifying record – and such was the case, ‘Bluey’ Wilkinson scored a maximum but Langton had more bonus points as did Van Praag. Eric Langton and Van Praag lined up for a match race but Eric broke the tapes. Van Praag declared he would not be champion by default and demanded a re-run. Langton gated ahead and led until the final bend when leaving the smallest of gaps he was unable to hold the dashing Australian back and Lionel won by inches.

Langton’s near miss on the first ever world final assumed a degree of controversy in later years. The deciding match race with ‘Praagy’ was ‘fixed’ between the pair, according to sources close to the action. It was alleged that Eric and Lionel agreed that whoever got to the first corner in front would go on to win and they would split the prize money between them. It almost worked out, Langton was ahead until the final corner when he left a small gap which Van Praag couldn’t resist going for. The first ever world final was won by about a wheel width and the Australian took the title.

On January 26, 1942, Sergeant van Praag was the co-pilot of RAAF DC-2 A30-8 when it was attacked by a Japanese aircraft and forced to ditch in the Sumba Strait while on a flight from Surabaya to Koepang. Although some, including Lionel, were wounded, the entire crew survived the ditching to endure 30 hours in the ocean while fending off shark attacks. For their bravery in securing the survival of their crew, the aircraft captain, Flying Officer Noel Webster and Sergeant Van Praag were both awarded the George Medal.

He resumed racing in 1946 in Sydney, returned to England in 1947 for one more speedway championship season with the New Cross team, and retired from racing in 1948 to concentrate on flying.

In February 1951 he combined his aviation and speedway interests by contracting with Empire Speedways to carry the Great Britain and Australian competitors, along with their bikes and toolboxes, between the various Australian speedway venues in a Lockheed Lodestar. He later flew for an airline in Pakistan for a year before returning to Australia.