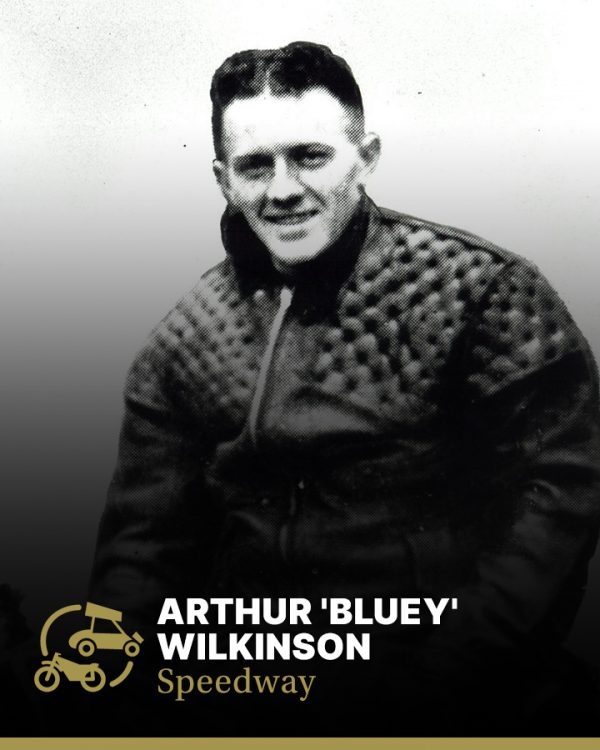 One of the most famous sporting sons of Bathurst, New South Wales, Wilkinson was the second, after Lionel Van Praag in 1936, to win the World Speedway (motorcycle) Championship.

His title victory came in 1938 and even Van Praag always admitted that Wilkinson deserved to be champion in 1936. That year, Wilkinson rode through the final unbeaten in five races, but was relegated to third place behind Van Praag and Englishman Eric Langton under a ‘bonus points’ system which operated during qualifying rounds.

Renowned for his courage and toughness, Wilkinson was at his gutsy best at the 1938 World Championship final. The night before the final he had crashed at a meeting in London and broken his left collarbone. Determined not to miss the final, he had the Tottenham Hotspur football club doctor put his arm and shoulder in plaster and ignored the agony to win four of his first five races and finish a safe second in the fifth to clinch the title.

Wilkinson was a butcher boy when motorcycle speedway was first staged at the Bathurst Sports Ground in 1928 and one look at the new sport prompted him to end a promising career as a rugby league footballer and invest his savings in a battered old belt driven Rudge. ‘Bluey’ was far from an overnight sensation, but one memorable night, Lionel Van Praag came to town, loaned the youngster one of his spare machines and Wilkinson promptly defeated the future world champion in a match race!

In 1929 Wilkinson decided to gatecrash speedway racing in England where the stars of the boom sport were earning vast fortunes. For three seasons he battled around the provincial circuits barely making a living until 1932 when the first division London club West Ham offered him a contract. On first-class equipment, Wilkinson dramatically burst onto the scene and within a few months became one of the best known sportsmen, let along speedway riders, in England. After his disappointment at the inaugural World Championship in 1936, he missed the 1937 final through injury, triumphed before a crowd of 95,000 at Wembley Stadium in 1938 and in 1939 retired to become the promoter at the Sheffield Speedway.

Wilkinson’s record in Test matches against England borders on the incredible. He scored 181 points in 23 pre-war Tests and scored a maximum 18 points in each of the five Tests staged in Australia in the 1937/38 season, a feat he failed to duplicate the following season by only a single point. ‘Bluey’ also won three Australian Championships, 1934, 1935, and 1938.

When war was declared in 1939, Wilkinson, a licensed private pilot, worked in an aircraft factory in England while he waited for a sea passage back to Australia where he intended joining the RAAF.

He finally managed to return to Australia in July 1940. Although Wilkinson had been involved in dozens of spectacular crashes during his speedway career, he had never seriously been injured and always declared he would never be killed on the track. Tragically he was correct.

On July 27, 1940, he went for a spin on his road motorcycle with his wife riding pillion and was killed instantly when he collided with a car in the Sydney suburb of Bondi. His wife escaped without a scratch.

Wilkinson always spurned style for spectacle, believing the fans watched for thrills. He always claimed he learned something from every crash and it is a fact that after one spine chilling pileup in England he discovered the left hand side of his machine’s handlebars was bent downwards, he liked the new feel, and never bothered to correct it.